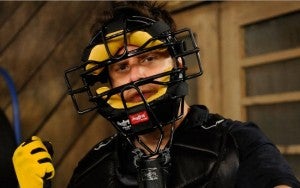 This week's episode of Psych, the cult-favorite police procedural on USA, guest-starred Joey McIntire of New Kids on the Block fame as a police officer and the episode featured a mild-mannered reporter who moonlights as a costumed vigilante called The Mantis. In addition to a thinly-veiled discussion of whether self-made heroes like Batman are cooler than the ones who have powers, it gave the Psych crew, certainly not unfamiliar with "theme" episodes, with an opportunity to play with the tropes of the omnipresent superhero genre movie and the comics they're born out of. A brass-heavy reinterpretation of the Psych theme, as well as commercial breaks and credits bumpered with shots structured to look like a comic book page, helped to sell the feel of the episode. Series star James Roday, who self-identifies as the driving force behind many of the theme episodes (he co-wrote and/or directed episodes about Friday the 13th, Twin Peaks and more--besides last week's vampire episode. He joined me last year for a discussion of the show just before USA aired the much-anticipated and well-reviewed Twin Peaks theme episode titled Dual Spires. With the possible exception of Community, nobody makes more pop culture references or has more fun with the medium than Psych does on all of TV. "Everybody's in on that now," Roday said of the theme episodes, which have become one of Psych's defining characteristics in recent years. "Those scripts come loaded with pop culture and obscure references and everybody's in on the fun now. I think in the very beginning it was us doing that stuff in the moment and a lot of improvisation and then once we sort of realized 'Oh, my God, this can be our niche,' everybody sort of jumped on board so now there's more of a balance." Oddly, considering the aforementioned comparison to Community (whose pilot episode talked a lot about The Breakfast Club), Psych really hit its stride--and found the fun and popularity of its theme episodes--after doing an homage to John Hughes in the show's third season. Prior to that, there had been a couple such attempts here and there (an American Idol send-up in their second season premiere and another episode later that year that saw Roday, a fluent Spanish speaker, cast in a telenovela), but nothing that took root in the imagination of Psych fans and the writers room in quite the same way. "I think that probably was some kind of benchmark," Roday said of the Hughes episode, which was titled Murder?... Anyone?... Anyone?... Bueller?. "We sort of streamlined, and made what we do a little less obtuse. We realized that we've become such a strange little hybrid, cult show that we can get away with paying tribute to movies that we love and genres that we love and I think that probably did sort of come together around the time that we did that John Hughes episode." The show's fans, of course, largely delight in the theme episodes, even if sometimes (as with the Hitchcock homage that wrapped season 4) they sometimes trend a little darker than the average episode of the fairly light show. "We have a sixteen-episode season and chances are fourteen of them are going to be down-the-middle, Psych wheelhouse kind of episodes," Roday explained. "I believe that we've kind of earned the right to go outside the box once or twice a season and I think our fans have shown a real appreciation for when we do it." The star also feels that many of the outside-the-box episodes have turned out to be some of the best of Psych's six-season run. He explains, "They're different and because we manage, and have learned how to execute them. I think they're just little event episodes that offer their own isolated treat. I would never sit someone down who didn't know what Psych was and put the Hitchcock episode in front of them because I think it would be creating false expectations, but it is something that I would say, 'Look, a couple of times this season, you definitely get this.' And that's all the more reason, I think, to tune in because I don't know how many other shows right now are doing things like paying tribute to Twin Peaks but my guess is not many." Up next? Well, after taking on vampires on the week of Halloween and following that up with superheroes, Roday will take a look at another beloved sort of niche film--the sports movie. Guest-starring Hall of Fame baseball star Wade Boggs, this week's episode will play with some of those expectations--and will likely feature some really enjoyable moments from Corbin Bernsen, the veteran actor who plays Roday's father on Psych and who starred in three Major League movies.

A Few Words With The Amazing PSYCH-Man, James Roday