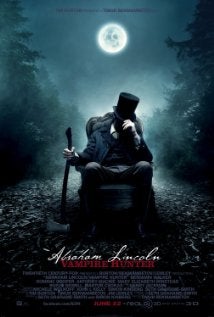 There are a dozen-plus films that are must see this summer.  And one of them is one you've probably never heard of: "Abraham Lincoln: Vampire Hunter."  Yes, that's right, the 16th President will be fighting vampires. But before you roll your eyes, consider that the film is produced by Tim Burton.  Which means the material had to be interesting as hell for him to produce.  And it's directed by Timur Bekmambetov, who masterfully directed 'Wanted.'  And oh, he's somewhat of a vampire movie expert.  After all, he directed 'Night Watch' and 'Day Watch.' Most importantly, according to the LA Times, the experts at the Abraham Lincoln Presidential Library and Museum in Springfield, Il, give it a thumbs up. Last Friday night, Bekmambetov and Benjamin Walker (who plays Lincoln), introduced scenes from the film to staff and others in a 250-seat theater. Library spokesman Dave Blanchett said, "we enjoyed it. We were told that the movie contains a lot of gore, but what we saw was not gory. It was action-packed." He also added, "Obviously, it's not authentic Abraham Lincoln," Blanchette said. "But this is going to attract a new segment of the population to the Abraham Lincoln story that might not otherwise be attracted to it." In case you haven't seen the trailer, here it is:

Viral Marketing for Horror Movie Smile is Freaking Everyone Out