In this week's Savage Dragon #194, readers are treated to a pair of backup features. One, featuring longtime Savage Dragon supporting players Barbaric and Ricochet, was written by series editor Gavin Higginbotham and plays pretty much like any other backup feature in the title. The other, by a variety of cartoonists, features the return of a funnies page to Savage Dragon. That might be uncommon in many modern comics, but not to Dragon. For years, Savage Dragonbert by Karl Hornell ran. A strange mashup of Dragon and Scott Adams's Dilbert, the strip dealt with the misadventures of a nerdy version of Dragon frequently belittled by his faithful companion Hitler's Brainbert. Not long after that wrapped up, we got Twisted Savage Dragon Funnies from a variety of impressive indie comics names. Now, Larsen says, the comics page is back, and it's a fairly ongoing feature for now, but he's working with Adam O. Pruett to keep it going without keeping it on Larsen's plate. "Largely I'm delegating," Larsen told ComicBook.com in his standing Savage Dragon commentary track. "Chris Eliopoulos is a given, as is Knight Watchman but Adam Pruett has taken on that task of coordinating that. He'll run things past me but he's doing all of the running around, which I appreciate." Pruett joined ComicBook.com for a discussion of the feature, which launched in today's issue of Savage Dragon, #194. 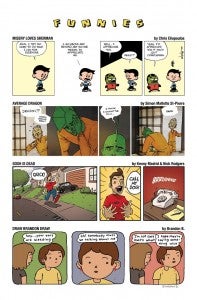 ComicBook.com: So whose idea was it to bring the funnies back to Savage Dragon? Adam O. Pruett: Probably about a year ago, I was talking with Gavin Higginbotham about plans for the upcoming Savage Dragon #200. We discussed the kinds of things that were being done in the book around the time the last major milestone issue, #100, came out. I realized I kind of miss the era of the book where the backup material was this constantly-shifting jambalaya of fun stuff; not just stories, but pin-ups, gag ads, lengthy letters columns, and so forth. I love the extended backup stories, but there had been a lot of that in the book lately (most recently the 12-chapter Vanguard serial), and I wanted to mix it up a bit. So, I threw together a mockup comic strip section and sent it to Erik, and he gave me the green light to move forward. ComicBook.com: What's your favorite - The Savage Dragonbert or Twisted Dragon Funnies? Pruett: There will always be a special place in my heart for Dragonbert, but I gotta give it up for Twisted Dragon. It's odd, goofy, weird, fun, and it had a lot of heart. Michel Fiffe put together an amazing roster of creators for that project, and anyone who hasn't checked it out yet should do so immediately (as well as Michel's current book Copra!). ComicBook.com: How do you choose the cartoonists and features to be included in this? Pruett: I knew right away I wanted to include Misery Loves Sherman by Chris Eliopoulos. In addition to lettering Savage Dragon for the bulk of its run (and everything else under the sun), Chris has really come into his own as a cartoonist; his recent work on Cow Boy and Ordinary People Change the World has just been amazing. And since his comic Desperate Times was a Dragon mainstay years back, it just made sense to ask Chris lead the Funnies section. Another one that just felt right was Chris Ecker's Knight Watchman. Knight Watchman hails from Big Bang Comics by Ecker and Gary Carlson, and Big Bang has always tied into Savage Dragon pretty heavily. Ecker's got a wonderful drawing style, and putting his kind of classic-looking superhero adventure alongside these different gag strips was a blend I found hard to resist. For the remaining strips, it's pretty much just a matter of reaching out to people. If I come across something I find really funny or cool, and I have the space to spare, chances are good I'll try to get in touch. Erik can cut any strips he doesn't care for, but so far he's been fine with everything I've brought him. And since there's no main theme or style the strips have to adhere to, the section should be a bit of a variety showcase. ComicBook.com: Can we all just bask for a moment in the genius of the title "Average Dragon?" Pruett: Average Dragon is great! Simon Mallette St-Pierre did the Mr. Glum/Ba-Goom backup in Savage Dragon #192. He's very funny, and we'll definitely be seeing more strips from him at some point (Dragon-related or otherwise). ComicBook.com: Will these features be recurring or will be be basically different each month? Pruett: Misery Loves Sherman and Knight Watchman will be recurring, but the rest of the strips are up in the air and will generally rotate issue to issue. Some strips may only be seen once. There are practical reasons for this (such as available page space), but it's also just fun to do it this way. I hope people dig it.