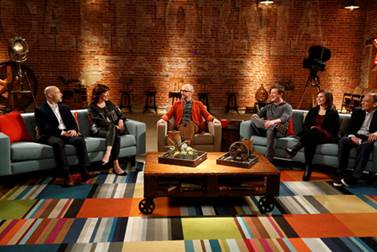 On tonight's episode of The Writers' Room, host Jim Rash will host a number of guests tied to the acclaimed Netflix series House of Cards -- and will debut the music video for Adam WarRock's "I Can't Stop Watching House of Cards," a bit of musical love for the show.

But before it airs -- on SundanceTV tonight at 9 p.m. ET/PT -- we've got the video here on ComicBook.com.

Rash, the Academy Award-winning screenwriter, comedian and actor most recognizable as Community's Dean Craig Pelton, goes inside the show that exposes our nation’s (fictitious) dirty underbelly when he sits down with the creative team behind the Netflix hit series House of Cards. Showrunner and Creator Beau Willimon, series co-star Molly Parker, Writer and Story Editor Laura Eason, Co-Executive Producer John Mankiewicz, and Political Consultant Matt Bai dish about their precedent-setting production and roll-out model, what you’ll never see on the show, and how character “Francis Underwood” came to directly address the audience.

House of Cards star Kevin Spacey revealed this morning that he will be appearing in the upcoming Call of Duty: Advanced Warfare. His co-star, Kate Mara, will appear as Sue Storm in Josh Trank's Fantastic Four reboot.

The Writers' Room recently hosted The Walking Dead creator Robert Kirkman, who said he believed it would be nearly impossible to make a credible action series in which your lead actor has lost his hand (as Rick did in the comics).

In addition to building a career making music about pop culture (including, obviously, comics -- just look at his name), Adam WarRock has recently become a go-to talent for this kind of work. He released a Game of Thrones digital mix tape titled "Winter is Coming" and, not long ago, was one of the nerd-rock guests of honor on a live album from The Kirby Krackle, which was released the week of Comic-Con 2012.

Check WarRock's video below -- then check out The Writers' Room tonight on SundanceTV. If you want to know more about Adam WarRock, you can read our recent interview with him here.

How Making Cherry Compared to Marvel Work For Russo Brothers