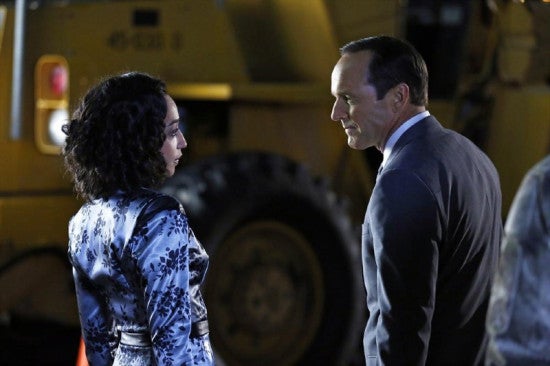 didn't do quite as badly in the ratings on Tuesday as initially thought, although the extra one-tenth in the 18-49 demographic wasn't enough to lift it past "worst ratings ever" status for the series. Final ratings put S.H.I.E.L.D. back up over 6 million total viewers for the night (6.11 million), with a 2.1 rating and a 6 share in the 18-49 demo, says TV By the Numbers. After sinking every week for the first seven episodes of the series, the season's eighth and ninth episodes each rose slightly, giving fans the sense that the numbers may have stabilized. Those covering the entertainment industry cautioned against too much enthusiasm just yet, though, as S.H.I.E.L.D.'s rising numbers came as NCIS and The Originals, two series with which Marvel has a sizable crossover audience, had at least one skip week each during the two weeks S.H.I.E.L.D. rebounded. Against a normal night of competition, S.H.I.E.L.D. resumed its downward trend this week, indicating that it hasn't quite found its level yet.