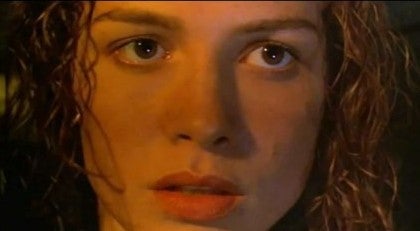 Saffron Burrows, best known for her roles in Deep Blue Sea and Boston Legal, will star in an upcoming episode of Marvel's Agents of S.H.I.E.L.D., reports Latino Review. The actress will play Victoria Hand, a S.H.I.E.L.D. Agent who defected against Nick Fury amid concerns over the War on Terror and sided with Norman Osborn during the "Dark Reign" story in the comics, in which supervillains took over S.H.I.E.L.D. and installed themselves as "Dark" versions of a number of Marvel's popular heroes. That's when the Iron Patriot armor seen in Iron Man 3 was most heavily featured in the comic book source material, for those keeping score at home. During that time, S.H.I.E.L.D. was also rebranded as H.A.M.M.E.R., which might tie into what appears to be a factioning of the super-spy organization in the upcoming Captain America: The Winter Soldier. If so, expect Hand's actions to have a big impact on Agents of S.H.I.E.L.D., especially after ComicBook.com recently reported that events taking place in the series would leave an impact on the S.H.I.E.L.D. fans see in Captain America: The Winter Soldier. In the comics, Hand started at a desk job before moving up in the intelligence community; along the way, her relationship with another woman at S.H.I.E.L.D. ended because Hand's politics wouldn't allow her to keep quiet and she ended up being transferred after writing a caustic letter to Nick Fury. Hand would be the first LGBT character introduced to the Marvel Cinematic Universe and a potential recurring ally or enemy for Coulson's team. Anytime an LGBT character shows up in a top-rated prime time TV series on a major network, it tends to be news--often drawing comparisons to Ellen DeGeneres's career-defining decision to come out--both as her fictional character and in real life--on her sitcom Ellen. That's just as true in comics, where anyone who isn't a straight white male is a bit of a novelty, so don't expect her sexuality to go unmentioned in the series.