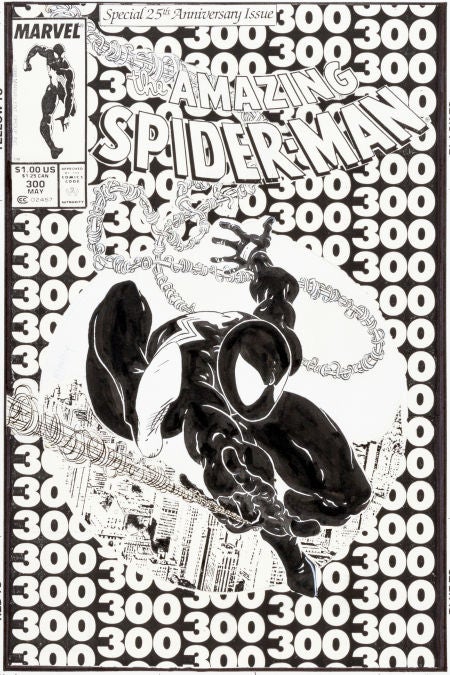 Todd McFarlane’s original cover art to The Amazing Spider-Man #300, one of the most iconic comic covers of all time, is going to auction this November.

The cover, by classic Spider-Man artist Todd McFarlane, has Black Suited Spider-Man swinging through New York City inside a frame of #300s. Beyond its landmark as an anniversary issue, Amazing Spider-Man #300 also features Spider-Man’s first clash with Venom. The cover, one of the most recognizable in comics, has received numerous homages and lampoons from Marvel throughout the years.

The auction, which officially runs from November 20th to November 22nd, has already hit bids reaching $101,000. Auctioneer Heritage Auctions has previously auctioned a piece of Todd McFarlane art from The Amazing Spider-Man #328 for $657,250 in 2012. At the time of the auction, it was the highest-selling piece of comic art ever.

The cover itself also features three signatures from McFarlane, as well as an editorial note from Marvel. Better start saving those pennies.

Amazing Spider-Man #300 Cover by Todd McFarlane Up For Auction