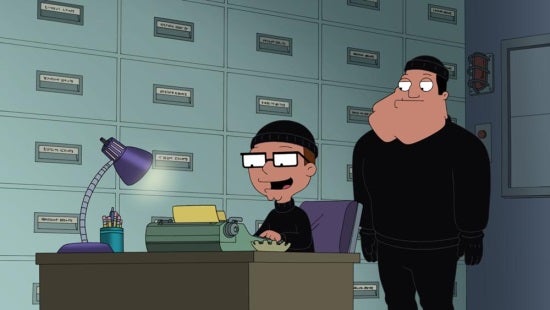 A new episode of American Dad, "Permanent Record Wrecker," airs on Fox tonight. In "Permanent Record Wrecker," Stan is fired from the CIA in a round of budget cuts, but since his 20 years of work experience are classified and hidden from his "permanent record", the only job he's able to land is at the local grocery store where Steve is the manager. Meanwhile, Roger bets an annoying coffee shop musician that he can outplay him in one week. To accomplish his goal, he enters into a Faustian bargain with Lorenzo, a guitar-instructing infomercial host The voice cast includes Seth MacFarlane as Stan Smith and Roger the Alien; Wendy Schaal as Francine Smith; Rachael MacFarlane as Hayley; Scott Grimes as Steve; Dee Bradley Baker as Klaus; and Jeff Fischer as Jeff. Guest voices include Robin Thicke as the coffee shop musician and Stanley Tucci as Lorenzo. American Dad, "Permanent Record Wrecker," airs Sunday, May 4 at 7:30 PM ET on Fox.