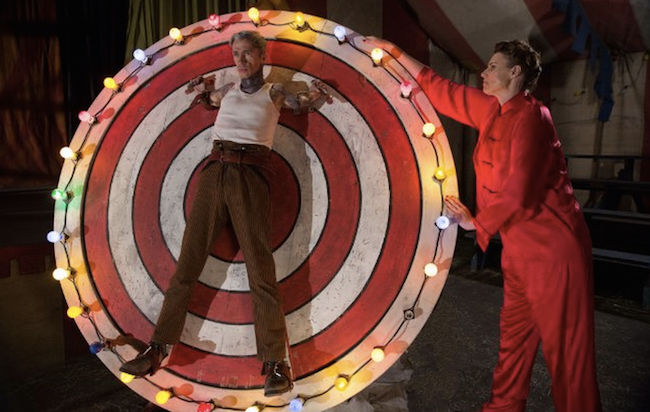 Episode six of American Horror Story: Freak Show, aptly called “Bullseye,” opens with Elsa (Jessica Lange) sending a giant, life-size bullseye wheel to the main tent. Ethel (Kathy Bates) wonders if it’s for the show, but Elsa says it’s for her television gig. She also claims that Bette and Dot (Sarah Paulson) made a run for it when they were out to town for new clothes.

Dandy (Finn Wittrock) has fallen in love with Bette and Dot, ever since Elsa gifted them to Gloria, and when Gloria (Frances Conroy) gives her son prophylactics to avoid mucking up their gene pool further, he tells her that he intends to marry them. He’s a freak, they’re freaks, and being with them makes him feel normal.

Dandy has been treating the twins like royalty, and of course, Bette loves it. Dot remains skeptical but is willing to put that aside when Dandy reads a newspaper article about two Siamese twins that have been successfully separated. She needs his money to fulfill her dream of being separated from Bette.

Later, Dandy points out that Dot has a lot of secrets. She even locks her journal. He suggests they trade a secret for a secret, and so he tells them that it was him that killed the serial-killing clown, not Jimmy. When Dot refuses a secret in turn, Dandy throws a temper tantrum.

Back at the circus, Elsa’s birthday week isn’t going quite as planned. The rest of the circus keeps moping around over the loss of the twins – even Elsa’s secret lover, Paul the Illustrated Seal (Mat Fraser). She offers to take him with her to Hollywood. He could pretend to be her chauffeur whenever her “normal” suitors show up. He declines.

Paul is then shown in bed away from the circus with Penny The Candy Striper (Grace Gummer), who continues to run away from home to see him. Paul tells her that he loves her, but her father bursts in and begs her to come home.

Later, Paul goes to the store to buy perfume for her, when Dandy storms in with demands for the shopkeeper. Paul remembers Dandy and specifically recalls his desire for the twins. Paul notices that Dandy is buying women’s items in pairs – and Dandy’s notices his noticing. He tells the shopkeeper that the freak tried to steal from him, and Paul is kicked out.

Back in Elsa’s tent, Paul listens to her sing the number she is preparing for TV. He says he doesn’t want to spend the night, and Elsa, smelling the perfume on him, realizes that he’s been with someone else. They argue until, eventually, Paul accuses her of knowing what happened to Bette and Dot. He claims that all the freaks are talking about. 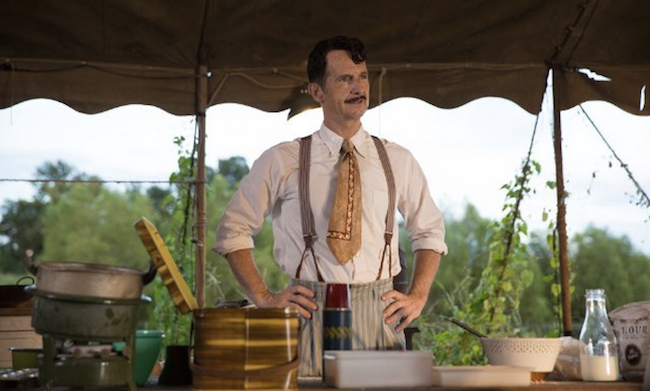 Enraged – Elsa demands that all of the freaks be woken up. She throws around the presents, declaring them useless. She doesn’t understand how they could dare mistrust her after everything she has done for them. The only way the can prove her loyalty now is for one of them to be strapped to the bullseye wheel. Jimmy (Evan Peters) offers to do it, but Paul volunteers in his place. Two knives miss him, but the third hits Paul the Illustrated Seal right in the stomach

Next, Penny tries to run away from home again, when her father pulls out a gun. She says that she loves Paul and that she would rather die than spend another day in their middle-class Hell of a home. She goes to the circus to find Paul and finds him dying, with Elsa whispering in his ear, accusing of him of betrayal.

Maggie (Emma Roberts) is out for a smoke when she runs into Stanley (Denis O’Hare), who’s disappointed to hear that the twins escape. In their place, he wants Jimmy, or at least Jimmy’s lobster claws. Maggie suggests Ma Petite (Jyoti Amge) instead, who would be much easier to capture.

Ma Petite is asleep in her bed, later in the episode, when Maggie wakes her up and carries her away to a shed with Stanley’s supplies. Maggie picks her up, lowers her into a jar, and even begins to lift the jug of formaldehyde before changing her mind.

The next morning, Jimmy tells Ethel that he’s suspicious of Elsa, since the doctor she allegedly called never even showed up. Then he runs into Maggie, who leaves Ma Petite with Amazon Eve (Erika Ervin). Maggie begs Jimmy to run away with her. He agrees but says he has one more thing to do first.

Maggie goes back to her tent to pack her bags but finds Stanley. He realizes that she’s trying to escape and threatens her life. She tries to convince him that it’s just to risky now, given the twins’ disappearance and Paul’s accident, but Stanley insists that she get Jimmy to the shed.

Back at their home, Gloria finds Dandy sobbing when she brings him his snacks. He’s read Dot’s journal, which details how Dot can barely tolerate Dandy. She calls him painfully boring, even saying she would rather die than kiss him. She admits in the journal that she is only there for the money that she can get from him.

Dandy goes on a rant about his empty soul, which now, without the twins, is officially devoid of anything. He tells his mother that he was put on Earth for one thing – to kill. He pulls a knife out of a toy chest and puts it in his waistband when the doorbell rings. They answer the door to find Jimmy. Dandy invites him in, saying, “He’s here for the twins.”

The episode ends when Elsa goes to the main tent for her birthday cake. Ethel is the only person there, while everyone else stays with Paul. Elsa tells Ethel that she’s like the sister she never had.

In return, Ethel says that if she ever found out that Elsa was truthfully behind the twins’ disappearance, she would kill her with her own two hands. Elsa blows out the candle on her cake and wishes to be loved.