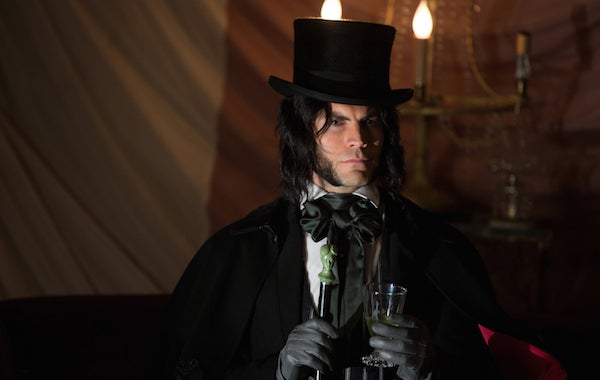 This fourth episode of American Horror Story: Freak Show presents part two of the saga of Edward Mordrake (Wes Bentley), an aristocrat turned murderous freak by the voice in his head – from the second face on his head. Mordrake was summoned in the previous episode, visiting with Ethel (Kathy Bates) but eventually sparing her soul. However, legend says his spirit cannot return to Hell without a fresh freak.

Mordrake opens the episode, waking the performers in the middle of the night to meet with them individually. He asks them how they got there, and we learn more about the history of Paul the Illustrated Seal (Mat Fraser), who weeps over the paradox of his handsome face and ugly body, and Legless Suzi (Rose Siggins), who killed a man after stabbing his legs. They’re still too innocent for Him, leading him to Elsa (Jessica Lange).

Elsa thinks that Mordrake is simply some guy in a mask, here as a Halloween prank. She expects his visit, assuming he’s there to make her a star or at least praise her. Her ignorance offends Mordrake, and his spirits attack her. When she realizes that he’s real, she sobs and insists that she’s not “one of them.”

Next, he demands that she tell him the story about her legs.

Elsa started doing videos, until eventually, she was drugged at the beginning of a shoot. She couldn’t fight back but was able to feel and see everything that was happening. Men tied her down and cut off her legs for a snuff piece, though she was thankfully saved by a fan who had followed her. The video was passed around all over Europe, and though she became a star, her career was over.

Hearing this story, the voice says that she is the one. Elsa readily accepts her fate, but just as Mordrake is about to kill her, he’s distracted by some music.

All the while, Jimmy (Evans Peters) and Esmeralda (Emma Roberts) are on their way back from town, when his motorcycle runs out of gas. She pesters him about why he hasn’t hit on her yet, questioning his intentions. Since they’re out past curfew, Jimmy keeps insisting they get off the road. They finally jump out of view when a car comes by: Twisty’s trailer.

The captive young woman briefly escapes the trailer – in full view of Jimmy and Esmeralda who are hiding nearby. She’s followed by Twisty who knocks her out and takes her back, this time followed by Jimmy. Just as Jimmy and Esmeralda realize that Twisty is the town serial killer, they are knocked out by Dandy (Finn Wittrock) from behind in his clown costume. 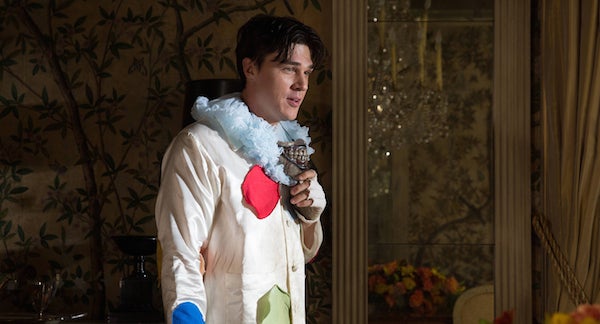 They wake up to find themselves tied up with the other captives around a fire. Dandy has Esmeralda in a box and starts his “show” by attempting to cut her in half. He’s so distracted by the manic sawing that Jimmy knocks him over. Twisty responds oddly, by encouraging the captives all to clap. Most of the captives are able to flee, infuriating Dandy, but Twisty takes Jimmy back to his trailer.

It was the music from Dandy’s “show” that stopped Mordrake earlier, and he appears just as Twisty is about to stab Jimmy. Mordrake first encourages the clown, but when Twisty resists, Mordrake asks him to take off his mask. We see more clearly than in past episodes that he is missing his jaw and almost half of his face.

Next, Mordrake asks Twisty (John Carroll Lynch) to tell him his story. The clown cannot talk, but when he thinks clearly, Mordrake can hear.

In a 1943 flashback we meet pre-accident Twisty, who was a simple clown that loved to make children happy. The other carnies were jealous of the attention Twisty got, and they told Twisty that they had called the cops on him, accusing him of messing with the kids. Twisty was forced to leave the circus, and once the rumor spread, he was unable to find work.

He eventually returned to his hometown to be with his mother, but she had died. In a last desperate attempt at meaning, he tried to make toys for children out of garbage. Obviously no one wanted the toys, and Twisty tried to kill himself by shooting a gun in his mouth. He did not die but only blew off half of his face. The bandages he wore of his mouth inspired his now infamous clown mask.

When Elsa and her freaks came to town, they hardly entertained the notion of Twisty trying to sell some balloons nearby. He bitterly remembered how the freaks at his circus ruined his life. Twisty felt that the freaks were stealing the children’s love, inspiring his murderous rampage. He was trying to be a “good clown” for the kids, when he killed their “mean” parents and brought them a pretty (kidnapped) babysitter.

The voice speaks to Mordrake, declaring that Twisty is “the one.” Mordrake kills him, and Twisty’s spirit joins the group of forsaken freaks. When Dandy finds Twisty’s dead body, he takes the clown mask and puts it on himself. Sirens are suddenly heard, and Dandy leaves the scene.

In the morning, Jimmy and Esmeralda aren’t able to help the police much in their investigation. They can’t describe the clowns’ faces because of the masks, and only one of them (Dandy) spoke. Even then, his voice was muffled. Jimmy uses this police face time to remind them that he will avenge the death of Meep.

Elsa is briefly angry with Jimmy and Esmeralda when they arrive back at camp – until she learns that Jimmy “killed” the town serial killer. A huge group of townspeople show up to thank Jimmy, whom they credit for saving their children and community. Elsa uses the opportunity to sell them all tickets, and it looks like the show is on a path to success.

As they set up, “Dr. Mansfield” (Denis O’Hare), Esmeralda’s partner in crime, shows up claiming to be a talent scout from Hollywood. Of course – Elsa says they’ll be able to find him a seat in the crowd.

The episode ends when Dandy returns home, still wearing Twisty’s mask. Dora (Patti LaBelle) scolds him and mocks the mask, until Dandy slices her neck. He slowly realizes that he loved it, giggling.