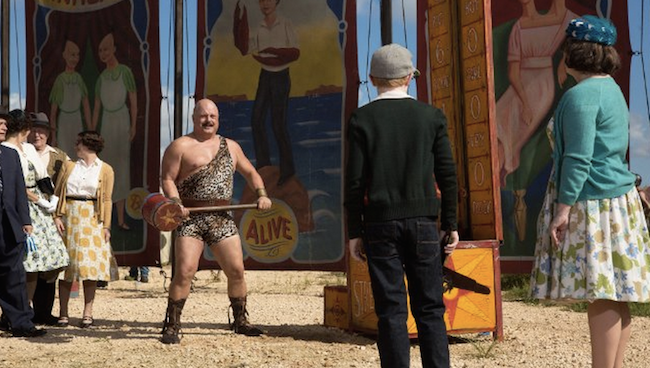 “Test of Strength,” the seventh episode of American Horror Story: Freak Show, opens right where the last one left off, with Dandy (Finn Wittrock) letting Jimmy (Evan Peters) into their home, in search of Bette and Dot (Sarah Paulson). Jimmy tries to convince them that they’re being objectified by Dandy and Gloria (Frances Conroy), but Gloria insists that they’re be taken of and could leave whenever they’d like.

When they tell Jimmy that it was Dandy that killed the clown, suddenly, Jimmy realizes that Dandy is the serial killer. Dandy also lets slip that he knows Dot’s desire to get surgery, revealing that he read her diary. Bette wants to stay, but she can sense that something is wrong with Dandy too. They leave with Jimmy.

Next, we see Jimmy performing Nirvana’s “Come As You Are” for Elsa (Jessica Lange), while Penny (Grace Gummer) cares for Paul (Mat Fraser) who is still alive and Dell (Michael Chiklis) looks for Andy at the male club. Jimmy tells Elsa that he knows she lied about the twins, who have returned. However, Dot lies and claims that they wanted to be sold to Dandy.

Ethel (Kathy Bates) and Desiree (Angela Bassett) are then shown on the way to the doctor’s, who has a “closed for business” sign hand-written on the door. All they find is his daughter, who believes it was the freaks’ fault that her father was killed.

Stanley (Denis O’Hare) is shown back at the circus playing the high striker, challenging Dell after teasing him about being at the gay club. The blackmail begins with Maggie (Emma Roberts) in tow as a witness in case Dell attack. Stanley wants Dell to kill one of the freaks, giving him a day to do so.

Jimmy is shown worrying about the twins with Maggie while they lay in bed together. She wants to skip town as fast as they can, but Jimmy is too concerned about Bette and Dot. Maggie worries that he’s just stalling and that he’ll never leave the circus with her.

Dell wonders into Amazon Eve’s (Erika Ervin) trailer nearby with a formaldehyde rag. She’s almost stronger than he is and puts up a serious fight before he ultimately yields and she physically tosses him out. Eve goes to Ethel to address her battle wounds, and Jimmy wants to go to the police about Dell’s attack. Ethel and Eve remind him that the cops have never been on their side, prompting a speech from Ethel about how they have to “take care of their own” and make Dell pay. 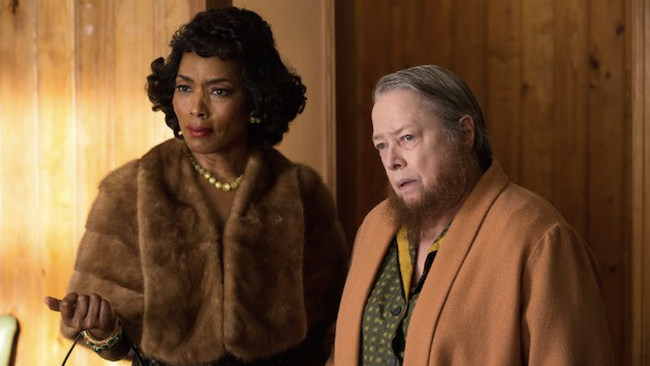 Meanwhile, Elsa chats with Bette and Dot, who say that all they want is to stay back at the circus. Dot wants to be a comedian and wants more money – and to dye her hair blond and eat caviar for breakfast. They also want the money that Gloria gave Elsa for them. Elsa is angry that they’re blackmailing her, but in response, they say they want 50% of the circus’s profits.

Jimmy approaches Dell at the high strike while Stanley watches from afar, so they have a man-to-man conversation at a nearby bar with shots, even though Jimmy doesn’t like to drink. Dell claims he just wanted to do a strong-man-strong-woman act with Eve, and as Jimmy loosens up, he even takes off his gloves and gives them to Dell, right before Jimmy has to run outside to throw up.

Dell is about to knock Jimmy out with a brick, when Jimmy emotionally admits that he knows that Dell is his father – the man who gave him lobster hands. They embrace and Dell tells him that they’ll figure something out. The father and son duo return to the circus at dawn completely wasted, making Desiree furious. Drunken Dell shouts to the whole circus that he is Jimmy’s father before putting his son to bed. Stanley waits outside of Jimmy’s trailer to tell Dell that he’s taking too long to bring him a freak.

Penny is shown heading home after taking care of Paul. Her father grows increasingly angry that she is shaming their family, and when she says she is going to live with Paul, her father introduces her to a man named Morris, a tattoo artist. While unconscious, he covers Penny in tattoos – after shaving part of her head and forking her tongue, effectively turning her into a freak. Penny, transformed, visits Paul. He believes that what has happened to her is his fault.

Bette is blond now, while Dot keeps her signature look. Bette even jokes that they make a perfect “before and after” picture. Elsa slips a piece of paper into Dot’s hand. She waits until Bette slips to look at the paper, a letter from Elsa that says she will give her whatever she wants instead of just money.

Elsa is shown back at her tent when she gets a response from Dot, her request to locate Dr. Oscar Sugar, the man who has successfully separated Siamese twins, and convince him to perform the surgery on her and Bette. Later, Elsa meets with Stanley, her “manager,” and asks him to help them with the doctor request to get the twins off her back.

Ethel enters the tent to bring dessert, unnoticed by Stanley and Elsa, and she overhears Stanley suggesting that perhaps they should just “mercy kill” Bette and Dot instead. Elsa tells him that the twins killed their mother. Elsa says she’s heard of managers “who would kill for their clients,” adding, “it looks like I’ve found one.”

Next, Dell visits Ma Petite’s (Jyoti Amge) tent in the middle of the night, giving her a present. He opens it to reveal a new purple dress that’s just her size. He picks her up to give her a hug, and instead just snaps her tiny neck with a single strongman hand, whispering that he is sorry.

The episode ends at the museum of morbid curiosities, where the latest exhibit – Ma Petite – is revealed to the patrons.