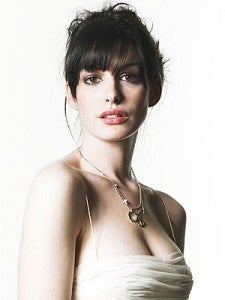 Yes, I know that it's just over a year until July 12, 2012. Yes, that IS the date that The Dark Knight Rises arrives in theaters, the latest in the Batman series of films directed by Christopher Nolan. Why yes, you are correct again that Anne Hathaway will be playing Selina Kyle/Catwoman in the film, and according to HollywoodLife.com, the costume she's wearing is something that die-hard fans of the character and her comic book roots can appreciate!

A source tells the site, "Anne’s outfit is more tactical, like the comic book, than the previous Batman movies. She will definitely be wearing the goggles and it’s going to be less sexy than Halle Berry and Michelle Pfeiffer’s Catwoman costumes. She’s going to look more like a robber.” The insider went on to tell HollywoodLife that Anne has committed fully to the role, and that her training, which has been described as "non-stop", is starting to pay off! Hopefully the rest of the world will be let in on some sneak peeks of Anne in the costume soon!

Anne Hathaway's Catwoman, "More Like the Original Comics", According to Source