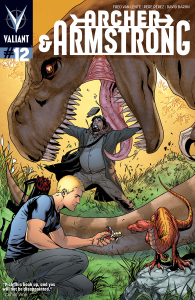 As Archer & Armstrong's "Far Faraway" storyline has built to a fever pitch, we got a month that's just full to brimming with hints being dropped for the future of the characters, the book and the Valiant Universe in general. It's the kind of standalone issue that you feel like somebody might come back to in a few years and say, "Oh, hey, nobody ever followed up on that nifty-sounding plot thread," which makes it even more of a must-read than usual. And, let's face it, folks--this book is a must-read. Since we do this commentary track, I haven't really reviewed the title yet, but it should be stated that this book is fun, smart, funny and action-packed; there aren't many books more deserving of your attention and your money. On that note--the interview which follows is spoiler-filled, which means you should really buy and read the book before you continue! Series writer Fred Van Lente joined us to discuss the issue, the future of the Valiant Universe and...Bill & Ted's Excellent Adventure? Okay, then...! ComicBook.com: Now, how many of these conspiracy theories are things that you just had a passion for, versus things that you specifically researched for the "Far Faraway" storyline? Fred Van Lente: Of all the topics we've tackled, my interest in Mysterious Disappearances dates back to when I was a kid -- They used air specials on them all the time on early, early HBO. I've always been fascinated by the Lost Colony of Roanoke, I guess probably because I've been fascinated by the colonial period in general, and this book, A Kingdom Strange by James Horn, is pretty excellent. It's less mysterious once you look at the evidence -- the hapless English colonists were just absorbed by the local natives -- but it is still a fun read. 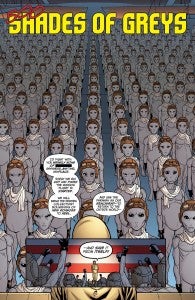 ComicBook.com: The next stage in human evolution is still pretty easily led by a charismatic leader who speaks in a loud voice. Is that commentary or just how the plot unfolded? Van Lente: Well, thanks to their hyper-tech, the next stage in human evolution has the minds of seventh graders and is obsessed with butts. So maybe not so strange. ComicBook.com: I understand the helmets--but is there a reason the greys all have bombadier scarves? Van Lente: To keep their necks warm. Duh. ComicBook.com: As the writer of the Comic Book History of Comics, have you got any special insight into how cave paintings like the ones we see here are similar and dissimilar to modern comics that you'd like to share? Van Lente: Jack Kirby should be as much of a household name as Stan Lee's, if not moreso, but he never had the skill and the burning need to be the center of attention that Lee does. ComicBook.com: You may not be the right person to ask here, but the color pallette seems a bit more subdued for this story arc. It suits the art well, but is it a question of the colorist trying to suit the art or am I just reading too much into the way the change of scenery is presented? Van Lente: You are right, I am the wrong person. But fortunately series colorist David Baron isn't. He's been with us since the prologue to this arc, #0, and I couldn't be happier with his work. I passed your question on to him and he says: "I feel that my colors overall are subdued compared to some of the other colorists in today's comics. I like to pick my places to go extreme as I feel that helps bring the characters in to a more realistic world. My main goal first is to always tell a story with my colors. The second is to blend with the art and to make it shine in the best ways possible." 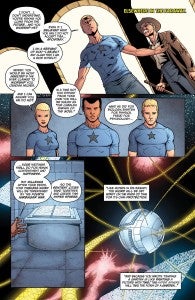 Can we expect to hear more about Mary-Maria's dad in the near future? Lots of lost things seem to turn up in Far Faraway. Van Lente: Well -- I don't know that he's lost. She just doesn't know where he is. There's nothing particularly mysterious about that, though. ComicBook.com: We've had a bit of insight into Obie's writings, but not a ton. Are you playing the Bill & Ted's Excellent Adventure angle a bit, where you let the reader imagine what it is that's so great about it to change the world? It seems that letting everyone write their own version is almost by default more effective than trying to come up with a definitive world-changing holy text. Van Lente: Archer's worshippers first appeared in the original Archer & Armstrong storyline back in the 90s, which was part of the time-traveling Unity crossover, and I got the impression that that was a bit of Bill & Ted satire going on there. The idea here, though, is that Archer has a very specific philosophy -- if a simple one -- and that people have very good reasons to follow it. (My Action Philosophers background is helping quite a bit, here.) ComicBook.com: There is a whole lot of Valiant Universe-centric future talk in here. How much of that relates to stories that you or others are directly working on versus things that are a little more abstract? Van Lente: Why would I tell you that? ComicBook.com: And the goat? Is that like Quantum & Woody's goat? Van Lente: "Like?" ComicBook.com: Ivar seems much more giddy than I had expected.The Venn diagram for the three brothers' personalities would overlap very little... Van Lente: Yup, that's part of the idea. Ivar is still in the process of being defined, though, I'd say.