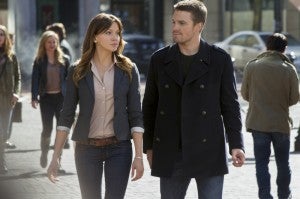 Earlier today, The CW Network released a new featurette for Arrow, focusing on actress Katie Cassidy and her role as Dinah Laurel Lance on the show. In the comics, before the New 52 relaunch, Oliver Queen (Green Arrow, the show's main character) was married to a Dinah Laurel Lance, better known to fans as the second Black Canary. The pair, along with Green Lantern Hal Jordan, traveled the countryside in the '70s to discover America. "He's the love of her life. I think that he was there for Laurel and vice versa until later in life when he made many mistakes and she sort of was left heartbroken," Cassidy said in the featurette. "We all think that he's dead. He shows up one day and she doesn't know what to think or how to feel. She's completely confused and shocked." While she's not Black Canary (yet), the starlet has expressed a desire to get those butt-kicking boots on sooner than later. Between now and then, though, she apparently focuses on charity work and finds herself at the center of Oliver's rivalry with series villain Adam Hunt. Whether Hunt has anything to do with the accident that shipwrecked Oliver (and with which his mother has been implied to be involved) remains to be seen. "Laurel is very driven. She is full of love and really, really wants to give back to the world as much as she can," she said. "Adam Hunt, in this town, he's well known for taking advantage of the lower class and she goes after him. She's not afraid of it."