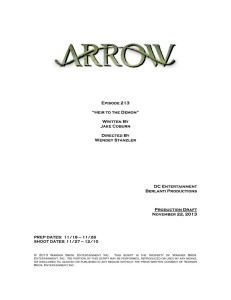 writer and executive producer Marc Guggenheim took to Twitter this afternoon to announce that while it may be a skip week for the hit CW superhero drama, production has reached the halfway point. He then went on to share the title and writer information from season two, episode thirteen, titled "Heir to the Demon." (Really, though, he was just confirming an already-reported title, since one of the guest stars was recently cast.) Written by Jake Coburn, who was responsible for the fan-favorite episode "League of Assassins" earlier this season, "Heir to the Demon" will be directed by Wendey Stanzler, who directed that episode as well as a number of The Vampire Diaries and Glee episodes. "Heir to the Demon" seems a pretty clear reference to Ra's al Ghul--and will likely heavily feature Katrina Law as Nyssa, one of his daughters. Arrow returns next week with the anticipated episode "The Scientist," which features the first appearance of Barry Allen, played by guest star Grant Gustin.

Arrow: Heir to the Demon Filming As Season Hits Midpoint