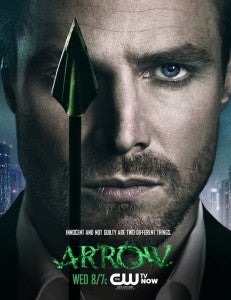 The Paley Center for Media announced a number of PaleyFest panels today, including one for Arrow, the hit CW drama based on DC Comics's Green Arrow. You can get tickets for the event, which will take place on March 9 at 7 p.m. Pacific Time, at the PaleyFest website. Panelists announced today include executive producers Greg Berlanti, Marc Guggenheim, Andrew Kreisberg and actors Stephen Amell, (Oliver Queen), Katie Cassidy (Laurel Lance), David Ramsey (John Diggle) and Susanna Thompson (Moira Queen). The PaleyFest events are generally available to livestream from the Center's website for those out of town. We'll bring more information on that as it becomes available. Here's PaleyFest's description of the event:

Venerable DC superhero Green Arrow—created in 1941 and derided early on as a Batman analog, though later reinvented as a champion of progressive causes—gets the CW treatment in this frosh series, starring Stephen Amell as Oliver Queen, a licentious billionaire transformed after a yachting accident kills his father and leaves Oliver himself stranded on an island for five years. Now a crackerjack bowman, Queen sets out to fulfill his father's dying wish: to "bring down those who are poisoning my city" (very modern, the new Arrow zeroes in on white-collar crooks). Simultaneously, Queen copes with a fractured family, a betrayed ex-girlfriend, and a cop obsessed with putting the vigilante superhero behind bars. The Arrow pilot was dubbed a "darkly gleaming gem" by the Philadelphia Inquirer; some critics even evoked comparisons to Christopher Nolan's Batman trilogy. Wrote the Los Angeles Times: "Smooth without being slick, textured but not self-indulgent, Arrow reminds us that the best stories we tell are both revelatory and a whole lot of fun to watch."