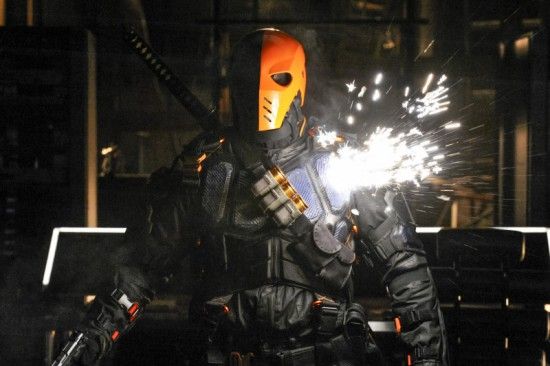 The CW has released a trailer, a clip, and a producer's preview for tonight's episode of Arrow, which is called "The Man Under The Hood." We've pulled both together in one place as a sneak peek at the episode. In the trailer preview, Oliver Queen plans to take the fight to Deathstroke, and the question is posed as to how someone kills the ultimate weapon. In the clip, Oliver, Canary, Diggle, and Felicity arrive at their hideout to find Deathstroke waiting for them. In the producer's preview, Executive Producer Marc Guggenheim talks about his excitement for the television debut of Caitlin Snow and Cisco Ramo. In the "The Man Under the Hood" episode of Arrow, Oliver (Stephen Amell), Canary (Caity Lotz), Diggle (David Ramsey) and Felicity (Emily Bett Rickards) return to the lair and find Slade (Manu Bennett) waiting for them. An epic battle breaks out and one member of Team Arrow is sent to the hospital. Thea (Willa Holland) hits her breaking point, but just as Oliver is about to reach her, Slade intervenes and Oliver is faced with a choice – his battle with Slade or his family. Meanwhile, Laurel (Katie Cassidy) struggles with a new secret "The Man Under the Hood" episode of Arrow is directed by Jesse Warren and written by Greg Berlanti & Geoff Johns and teleplay by Andrew Kreisberg & Keto Shimizu. "The Man Under the Hood" is scheduled to air on Wednesday, April 16, 2014 at 8 PM ET on The CW.

Arrow Season 2 Episode 19: The Man Under the Hood