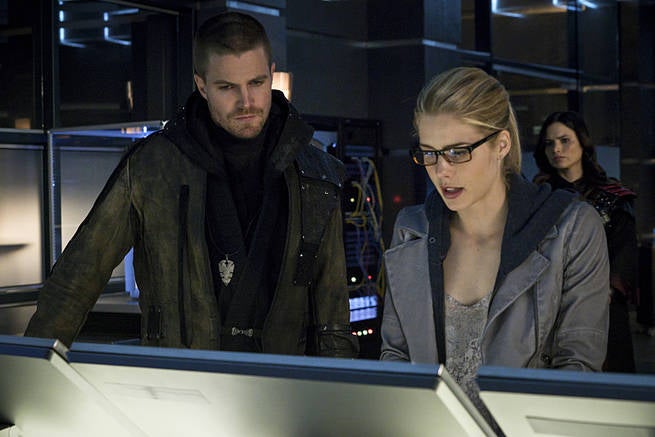 Marc Guggenheim is a bit of an engineer. On top of executive-producing The CW's Arrow for three seasons in a row, he's also one of the chief minds behind DC Entertainment's sprawling television universe. As the DC TV Universe expands with The Flash, Legends of Tomorrow, and Vixen, Guggenheim's in charge of constructing those pieces, ensuring that the separate parts combine into an efficient and well-oiled machine.

But no matter how complex DC's constructions may get, Guggenheim's heart and center will always be Oliver Queen. As Guggenheim ushers Arrow into its third season finale this week, the writer discusses how The CW's first superhero series has evolved and grown within the grand tapestry he and his team have built. Below, Guggenheim reveals how he unfolds crossovers with sister series like the Flash, explains Arrow's adaptation to an increasingly magical universe, and teases a possible Constantine crossover.

How do you map out the smaller crossovers between Arrow and The Flash? For instance, when you did the "Flash Vs. Arrow" crossover the first time, it was a huge event, but for these season finales, fans found out bit by bit as you released new information.

It's funny. I think our first inclination almost all the time is to be secretive, because we love nothing more than surprising the audience. That said, there's a lot of gravitational forces that are moving it away from secrecy. One is simply the desire to keep people interested in the show and certainly they're more interested in the things they know about than the things they don't know about. There's also the practical factor of, the fact that with The Flash and Arrow we don't only shoot on our stages, but also out on location. When you go out on locations you're in front of people with cell phones and cameras. It's always a bit of a balancing act. With respect to Flash's appearance in Arrow for the finale, we didn't really plan on keeping it a secret. We kind of didn't want to keep it a secret, but at the same time we wanted to announce it at the right time. There was no need to announce it any further out than we did. But even with the Flash's appearance, this is still very much an episode of Arrow. It's a an episode of Arrow that happens to have the Flash in it, unlike the crossover, where we were trying to merge both shows for an event. That was a much different animal.

Stephen Amell said the other day that the finale for season 3 feels more like a series finale. Is that more be a hint of him moving towards a newer incarnation of his character? Maybe something more in the vein of Green Arrow?

As we've moved closer towards the season's end, it feels like Oliver, as a character, has become unsympathetic. Do you feel like it's a gamble on your part to do that with the titular character? Or is there something deeper in there that you're just waiting for fans to discover?

It's funny, because it's a gamble we've taken pretty much ever since the first episode. The first act out, the first commercial break in the very first episode, is Oliver with his hand around his mother's neck. It's something we got a lot of mileage out of because Oliver doesn't always make the best decisions. I think a lot of people were saying, 'Oh you're writing Oliver this year like he's Bruce Wayne!' and I think they're giving Oliver too much credit, because Bruce, generally speaking, doesn't f— up. Oliver does… A big currency of the show is Oliver's poor decisions. He does make unlikeable choices. That's his character. And again, that's not a new development: that's going back to the pilot.

But does Oliver know that his actions are unlikeable? We actually get a very definitive answer from him to that point. Someone specifically asks him, 'How did you expect to repair all this?' He's got an answer for it. It may not be an answer you like, but I do think it's answer that will make him, if not likable, then sympathetic at the least. Especially when you see what he's been willing to do and why he's been willing to do it. I think at the very least there's a measure of sympathy for Oliver. That really, when we talk about sort of pushing the line with the audience, I think for my money, Oliver doesn't always have to be likable. Hopefully, that answer will satisfy some people.

You mentioned that this season's tone would skew darker. But, we've also seen the flip-side of that with fantastic bright spots from characters like Ray, and to some extent, Barry. As the universe grows with shows like Legends and The Flash, and with them more new characters, is it easier to balance the tone?

Ever since Barry came on the show in episode 208, the big surprise to us has been how much the show can actually withstand these additions. Not just in terms of super powers, but in terms of tone. I don't know if we could've had a character like Ray Palmer on the show in season one, in terms of his tone. It took Felicity opening that door. It took Barry to get us to accept the character again, like Ray, who could fly across the city in a suit. So, the show keeps demonstrating a capacity to always remain the show, to always remain what Arrow is. It should not only evolve, but expand what it can do and expand the types of tones it can hold onto. I actually feel like, if you're gonna do a series of any duration, specifically a network series where you're doing 23 episodes a year, you have to be able to change it up. There's nothing that kills a show quicker than episodes becoming formulaic and stagnant. Part of combating that is introducing new characters, bringing in new tones, and introducing new concepts like magic, which we did with the Lazarus Pit. All of these things are vital to keeping the show fresh and vibrant and constantly unpredictable . At the same time, it's our job as writers to make sure it never moves so far away from it's core that it becomes a different show.

I thought that introducing magic and devices like the Lazarus Pit was interesting, because it takes the show into unexplored territory. But now that Constantine is cancelled, does that give you guys latitude to pick up some of the devices that Constantine left behind? Could the John Constantine character  show up if you delved deeper into magic?

It's something we've discussed a great deal. I think there's a lot of desire on our part as writers, and also on the actor's part, which is also a prerequisite. I think the studio and DC would be on board with it. I think the tricky thing for us with the show's fate up in the air, it complicates things for us a bit. We're waiting for all the dust to settle and the pieces to fall into place, but it's something that continues to come up. We've had a lot of discussions in the writer's room about it. We have a lot of really good ideas, one in particular that I think is really fantastic. If it's feasible and it remains organic to the story, it's absolutely something we would do. But, there are certain things that are out of our control and need to be resolved before we go that route.

Becky Lynch Celebrates Huge Milestone as a Champion in WWE