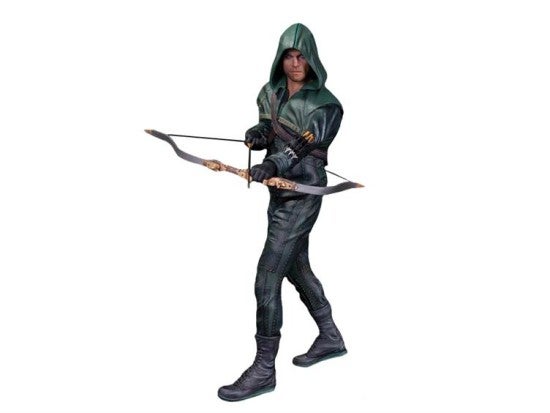 Last week, Arrow star Stephen Amell asked fans on his Facebook page whether they had a preferred outlet for him to sell props, collectibles and other Arrow goodies that he occasionally finds himself looking to get rid of.

It has turned out to be a precursor to a decision to auction items on eBay to benefit a young girl with cancer.

Prayers for Sophie is a charity he's promoted before on his Facebook page, to benefit a little girl and her family struggling with cancer and the attendant costs of medical care to keep the child alive. He's also recently visited with the family, and shortly after that is apparently when this plan took shape.

Amell says that every few weeks he will auction a new item for a charity that's close to his heart, starting with Prayers for Sophie.

The first item is a Gentle Giant Arrow statue based on Amell's likeness, which he says he will inscribe to the winner, shipping worldwide and writing anything within the bounds of good taste.

"In the interest of transparency, you will literally see me sign a check to Sophie's family and hand it over," Amell said, directing fans to check out his Facebook page or the Prayers for Sophie Facebook page for more details.

The eBay auction is now live and ends on May 19.

The Legend of Zelda: Breath of the Wild 2 Report Has Both Good and Bad News

Pokemon Cosplay Is Ready For Action With Sirfetch'd