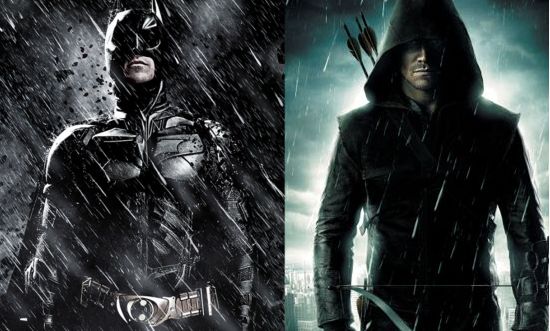 The CW's Arrow has featured several guest stars from the DC Comics Universe, but what character would Arrow star Stephen Amell like to see most make a guest appearance on the show? In a video interview with the Quiver Podcast, Amell shared his thoughts on who he felt Oliver Queen should meet. Amell said, "If I had a number one…well, if I had a number one it would be Batman, of course, because they would hate each other." Amell continued, "It would be amazing because so many people have always said that Green Arrow was like a rip-off of Batman. I would just love some piece of dialogue where I'm learning about Bruce Wayne, and I learn that he's a billionaire and that he runs this company and that he's a vigilante at night trying to clean up the streets of Gotham." Amell added, "And I would love to just go, 'Think of something original, Bruce.' That would be amazing, but who knows." The Arrow Mid-Season Premiere is scheduled to air on Tuesday, January 15, 2015 at 8 PM ET on The CW.

PlayStation Plus Subscribers Growing Frustrated by Lack of Retro Games