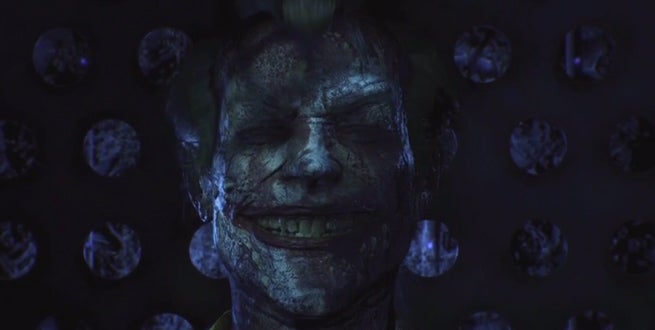 At Sony's PlayStation E3 2015 presentation, one game featured is coming out much earlier than the rest, Batman: Arkham Knight. The final game in the Rocksteady trilogy had an ominous new trailer shown at the presentation, with a lot of new information. Consider Spoilers on.

"This is how the Batman died," a voiceover says after we watch the Joker's still-smiling body get lit on fire. After that, we go into a strange first-person point-of-view scenario, and you're not Batman. You're a cop, and in a diner, and then everything goes to hell.

This is one of the new Scarecrow Nightmare missions that will be exclusive to the PlayStation 4. The other exclusives are the Classic 60s TV series skin for both Batman and the Batmobile, as well as a skin based on the Justice League 3000 comic book look.