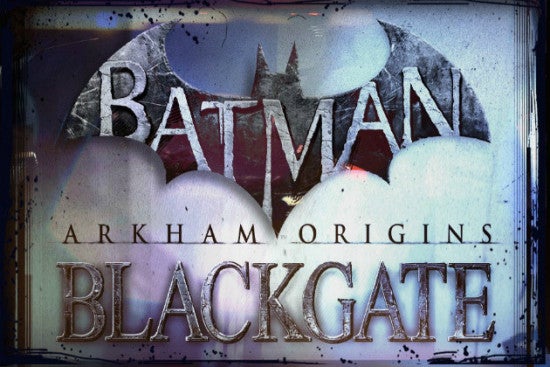 Batman: Arkham Origins Blackgate is the tie-in/follow-up to the recently released console game Batman: Arkham Origins. Developed by Armature Studio, its available for Nintendo 3DS and PS Vita, and it attempts to bring the trademark Arkham gameplay to handheld devices. Unfortunately, the experiment is not a very successful one.

The game mostly takes place three months after the events of Arkham Origins. A riot breaks out at Blackgate prison, which is currently housing all of the previous games' major villainous players: Black Mask, the Joker, and the Penguin. But rather than escaping, the three crime bosses have each laid claim to a section of the prison as their territory and are hatching plans to strike out at their rivals. Batman arrives on the scene ready to enter the prison and put an end to the chaos.

The game's story is told primarily through cut scenes that have the look of a motion comic. They're not unpleasant to look at, with a nice, dark purple color scheme setting the mood, but the animation is nothing to cheer about. The returning voice actors from Arkham Origins sound decent enough, with Troy Baker's Joker, once again, being the standout, but they all sound a bit bored, and Grey DeLisle's Catwoman is generic, a bit grating, and pretty forgettable – though that's probably at least as much the fault of the dialog, which is dull and content to let vaguely sexual puns be its most interesting aspect.

All in all, the story is thin. As a tie-in game rather than a main series installment, the game is specifically designed to be unnecessary and it succeeds. At best, its a long tease for whatever the series has planned for the Suicide Squad, as Amanda Waller makes her presence felt in this game and we get to see a couple more recruitments made to her team. 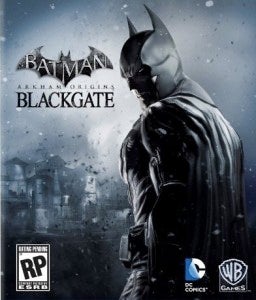 The gameplay is made from the Metroidvania mold. Blackgate prison becomes its own isolated world for Batman to explore. The game employs the 2.5-D graphical style of 3-D models moving on 2-D planes, occasionally spinning the world around to create the illusion of 3-D movement.

Armature also tries to graft some of the most recognizable aspects of the Arkham console games onto Blackgate, including the Arkham series combat and detective mode feature. Neither translate very well.

In Arkham Origins, there's a leveling system with experience points granted to players based on how well they do in combat and stealth encounters: the better you perform, the quicker you'll be able to maximize Batman's abilities and gadgets. In Blackgate, there's no such character progression. Gear and upgrades are only given out as the story requires, so there's little incentive to try to master Blackgate's combat, easier instead to just button mash your way through each group of enemies. The 2-D arenas further take away from the combat, since having enemies coming at you from two directions can't emulate the intensity of the console game, where enemies come at you at you from all angles.

Detective mode also suffers. A simple button tap will switch into detective mode, but then players must make use of the game's touch controls to find clues, items and objects to interact with. Players will find themselves routinely walking into a room, turning on detective mode, and rubbing the entire screen trying to make sure they haven't missed anything. It quickly becomes tedious.

Players will also use detective mode for stealth encounters, but these encounters tend to be exceedingly simplistic. Players just need to rub their finger in detective mode to find out which object will distract an enemy when touched, and then proceed from their. If their caught, its still not a big deal because combat is so easy even against armed opponents, with little penalty for failure.

The boss battles are disappointingly simple as well. Melee boss encounters will usually just require proper timing of certain button presses, similar to a mobile phone combat game. Stealthier boss battles can usually be bypassed by repeating the same stealth trick several times in a row. Others simply require you to learn a boss's pattern through trial and error and not mess up the sequence. None are particularly fun, challenging or engaging.

The game's biggest failure is that Blackgate is incredibly boring. The key to good Metroidvania game is to instill the thrill and excitement of exploration in the player. Its hard to keep up that excitement when every drab, blue or brownish room looks pretty much the same as the last. On top of that, very few enemies respawn throughout the game, so the prison feels increasingly empty as the game goes on.

The game doesn't really reward exploration in any quantifiable way ether. All of the gadgets and upgrades you need to get through the game are, inexplicably, located in the prison, but they're all on the main story path. You can find armor and attack boosts hidden through the prison, but they're hardly necessary to get through the game's simple combat. There are alternate costumes to be found as well, but with no New Game+ option and little reason to return to the prison once the story is complete, only a true completest will find reason to bother.

Simply moving through the complex is a challenge in itself, There is no fast travel. The map is hard to interpret, since it only gives the complex's barest outlines and doesn't take into account multiple levels in certain rooms, nor does it always label exits that aren't doors. It doesn't help that, while traveling, the camera will sometimes move and change which direction Batman is actually facing. Players will have to constantly check their map, even if they're only moving in one direction, to make sure that the prison hasn't somehow reoriented itself around them.

Batman in a Metroidvania style game should be a brilliant combination. Arkham Origins Blackgate does not deliver on that promise. A game like this needs to take place in an intersting and exciting locale, like one of the Joker's insane fun houses, not a drab prison setting. Perhaps the game would have been more successful if it wasn't trying, and failing, to translate the Arkham style of gameplay into a 2-D game world.

Batman and the Metroidvania style could combine into a fantastic game. Sadly, Arkham Origins Blackgate isn't it.