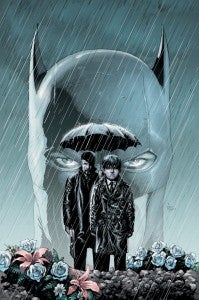 has been one of the best-selling graphic novels of the year in both the direct market and the non-comics bookstore market, so it's no surprise that DC is interested in making a second volume. Earlier today, writer Geoff Johns and artist Gary Frank made that announcement official via Twitter.

"Honored BATMAN: EARTH-ONE by me and the amazing@1moreGaryFrank was chosen as one of Barnes & Nobles best of 2012!" Tweeted Johns, with a link to the Barnes & Noble story.

Broken up over two tweets, Frank responded, "It's just a shame that there won't be a vol' 2...until next year!"

That follows the pattern of Superman: Earth One by J.M. Straczynski and Shane Davis. The first volume of their series debuted last year and kicked off DC's "Earth One" line of original graphic novels. The second volume will be in stores soon. It's hard not to imagine at this point that around the time they start to tease art from Batman: Earth One Volume 2, they might have an announcement regarding Wonder Woman: Earth One, possibly by Grant Morrison, who is reportedly working on an original graphic novel featuring the character already.

The Earth One line fills the niche that was almost immediately abandoned by the All-Star line of serialized monthly comics at DC. While All-Star Superman ran for a full year, told a full story and fulfilled the promise of all-star creative teams taking on DC's biggest characters, Frank Miller and Jim Lee's All-Star Batman and Robin the Boy Wonder never finished its run and, if it ever does, will reportedly return branded as "Dark Knight" and take place (officially) in the alternate earth of The Dark Knight Returns.

Jungle Cruise: Dwayne Johnson and Emily Blunt Have Differing Opinions on Whether Their Characters Could Beat Indiana Jones