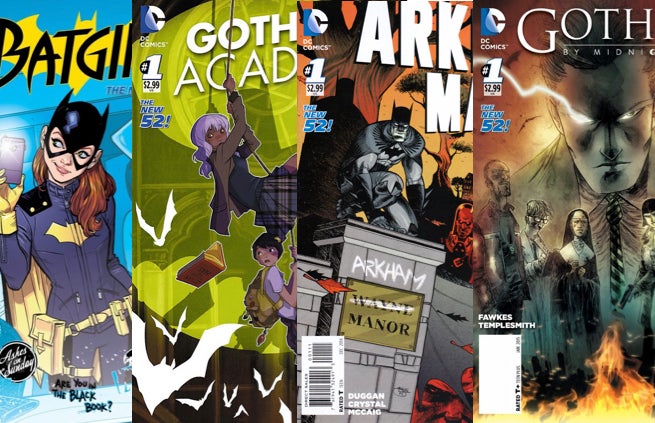 As much as Batman would like to think that Gotham is "his" city, it really belongs to Mark Doyle. Doyle, who took the reigns as Batman group editor for DC Comics earlier this year, has brought numerous changes to The Dark Knight's world during his brief tenure.

Along with shepherding blockbuster titles like Scott Snyder and Greg Capullo's "Batman" series, Doyle has also breathed new creative energy into Gotham's less-explore corners. In October alone, Doyle launched "Gotham Academy" by Brendan Fletcher, Becky Cloonan, and Karl Kerschl, and "Arkham Manor by Gerry Duggan and Shawn Crystal, and reimagined Batgril as a trendy crimefighter living in Gotham's hippest part of town. And next week he'll help launch the supernatural and surreal "Gotham By Midnight" with Ray Fawkes and Ben Templesmith. It's a lot of work for a man who's only lead DC's most venerable franchise for less than a year. Luckily, Doyle found the time to chat with comicbook.com about taking the reigns as group editor, what inspired all of the new directions, and where he plans on taking his city from here.

I happened to take this job at the same time we were celebrating Batman’s 75th anniversary. That’s a big deal. So I kept asking myself what has made this character endure for 75 years, and what can I do to help shepherd things along and set him up for 75 more? To me the answer was diversity. Diverse stories and characters and genres. Everybody loves Batman but everybody also loves different aspects of Batman. So I wanted to try to make a book for everybody. A Batman book for every fan, for every genre.

That became my mantra.

To that end, what other avenues of Batman's world would you like to explore in the future? Were there any other "out-of-the-box" ideas that didn't make it past the cutting room floor?

There are lots of other avenues, but I can’t talk about them yet!

What inspired you to drastically overhaul Batgirl for the "Batgirl of Burnside" revamp? Can you give us the story of how it progressed from an idea to the final product? And now that Batgirl #35 is out, what has the response been, both internally and externally, to the new Batgirl?

The response has been amazing! Internally. Externally. Everybody loves Batgirl. I saw a girl on the subway today wearing yellow Docs and I wanted to say, “Hey, do you read Batgirl?” But I didn’t want to seem like a creeper.

What inspired the change? Well, we knew the current creative team was thinking about wrapping things up and I was talking with former Batgirl editor Katie Kubert and asked her, “If we go with a new creative team, what do you want Batgirl to be?” Katie really focused on Babs, and what it would be like to be a 20-something girl living in Gotham—the coolest, scariest, most exciting city ever—who also happens to be a super smart superhero. So that was our starting point. And that’s when I thought of Cameron Stewart.

I had been re-reading all “Batman Inc.” by Grant Morrison and company. There was one fantastic issue that featured Stephanie Brown Batgirl, and I just loved it and loved seeing how Cameron handled all the different types of women in the story. And I thought, “We should call Cameron, I’d love to hear his take on Babs.” The rest is history.

Of all new characters you're introducing through "Gotham Academy," "Batgirl," "Arkham Manor," and "Gotham By Midnight," who leaves you the most excited as an editor? What makes this character especially interesting and unique to the Batman universe?

Parents are never supposed to say they have a favorite child, right? Seriously, though. There are so many new characters being introduced  in all of these books and so many story possibilities that we can explore now, it’s impossible to pick a favorite.


Along with new characters and titles, you're also welcoming a ton of new talent to Batman and DC Comics. What has it been like working with new voices and styles like Gerry Duggan's, Ben Templesmith's, Babs Tarr's, and Brenden Fletcher's? What new ideas and inspirations are they bringing to the table?

Exciting. Inspiring. Educational. They say that everybody has a Batman story in their back pocket. At least one. (Don’t you?) So I’ve found that when you approach someone new with a chance to step up to the plate and do Batman, they come up swinging for the fences because they’ve been waiting their whole life for this. It’s awesome to watch.

"Batman: Endgame" shook fans in a big way by bringing the Joker back into Batman's world. What made you and Scott Snyder decide that now was the right time to bring the Joker back? And to that end, has it been difficult keeping the character off of the table across the entire DC Universe so that he could have his grand reappearance in Batman #35?

Again, it’s the Batman 75th Anniversary thing. Scott and Greg knew they had to come up with something huge to celebrate this milestone. The Joker was the only worthy adversary for Batman to face.And this story is huge. Just wait. There are so many massive twists and turns—you won’t believe it.

As readers found out through January's solicits, Damian Wayne is indeed reclaiming the Robin mantle, but with superpowers. Without spoiling too much, how will this development affect Damian's relationship with Bruce and the rest of the Bat-Family? Will we see the repercussions of "Robin Rises" in any titles beyond "Batman & Robin"?

That’s a tough one. We definitely have big, big plans in the wake of Robin Rises. So, stay tuned.

You've been the main Batman editor for around 10 months. Were all of these new projects immediately part of your vision for the Batman line, or did they unfold naturally over time?What made you want to give up Vertigo for Batman, and how has it been jumping from an imprint, with insular stories, to the expansive world of superheroes?

But I’ve always loved Batman. Who doesn’t? And the opportunity to try to add something to a character who I have loved so much for so many years? That’s once-in-a-lifetime stuff right there. You gotta say yes to that.

As for the ideas, I had some when I walked in, but most of these ideas came organically from talking to writers and artists, getting pitches, looking at the stories we’ve done so far, and thinking about where we want these books and characters to go for tomorrow.

You've provided a lot of fresh perspectives to Batman's world thus far, but are there any other new characters or concepts that you would like to someday revamp? If you can divulge, who or what may they be, and why?

Sure, lots of other Bat-characters I haven’t gotten to yet, and other characters in the DCU too—but you'll just have to wait and see.

Awesome. Anything else you wanted to mention?
Nope, but thank you for the excellent questions and thanks for reading! I hope you like what we’ve been doing so far and keep reading—because we’re just getting warmed up!