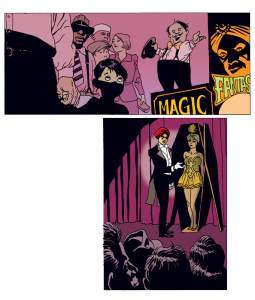 Earlier today at Fan Expo Canada, DC Entertainment made a couple of big announcements pertaining to their bestselling Before Watchmen event. First, Bill Sienkiewicz was named the new inker on Before Watchmen: Nite Owl. Andy Kubert will remain on as the penciler in spite of the passing of his father, legendary comics artist Joe Kubert, who was previously his inker on the title. "I've known Joe Kubert and his family for more than 30 years, and taught a semester at the Kubert School. Joe's sudden passing was devastating to me," Siekiewicz told DC's blog, The Source. "I'd always considered him unstoppable. A master of artistry and discipline. I am proud and honored to have been asked to continue his work on the Nite Owl series, and to be able to collaborate with his son, Andy, again after so many years. I feel a part of a son's touching tribute to his father." Second, DC announced a two-issue Moloch series set in the Before Watchmen timeline by J. Michael Straczynski and Eduardo Risso. DC Co-Publisher Dan DiDio had hinted that a Moloch stand-alone book was possible at May's Kapow! Convention in London. Below is the official press release, made available alongside the art at right on The Source.

Joining the roster of seven mini-series, BEFORE WATCHMEN: MOLOCH will be written by current BW: NITE OWL, BW: DR. MANHATTAN and upcoming SUPERMAN: EARTH ONE Vol. 2 writer J. Michael Straczynski with art by Eduardo Risso (SPACEMAN and 100 BULLETS). If you don't know who Moloch is, he's a villian in the Watchmen universe. In fact, you may have recently seen a glimpse or two of him in BW: COMEDIAN or BW: OZYMANDIAS. And now, you're about to learn a lot more. BEFORE WATCHMEN: MOLOCH #1 will be on sale November 7 and issue #2 will be available December 26.