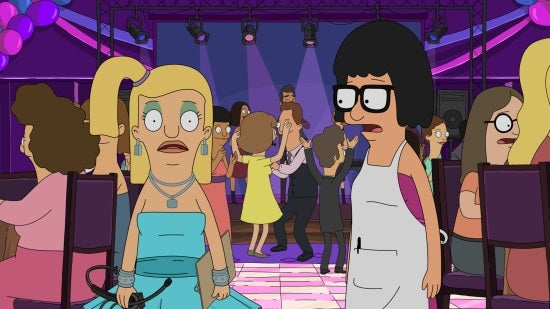 A brand new episode of Bob's Burgers, "Mazel Tina," airs tonight on Fox. In "Mazel Tina," Tina isn't invited to her classmate Tammy's Bat Mitzvah, but ends up at the party anyway, because Bob and the family were hired to cater. Despite the invite snub, Tina is excited to scope out the BFOS (boys from other schools). Things go awry and Louise and Tammy end up missing, so, to her total delight, Tina is left center stage. The voice cast includes H. Jon Benjamin as Bob; Dan Mintz as Tina; Eugene Mirman as Gene; John Roberts as Linda; and Kristen Schaal as Louise. Jenny Slate guest stars as the voice of Tammy. Bob's Burgers, "Mazel Tina," airs Sunday, March 16 at 7 PM ET on Fox.