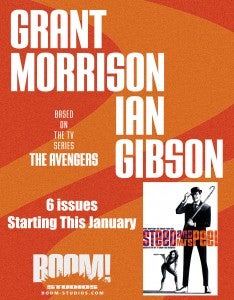 Before there was The Avengers (you know--the ones with Hulk and Captain America?), there was The Avengers (you know--the one with Patrick McNee and Diana Rigg). UPDATE: Of course, as pointed out both in the comments below and over at Bleeding Cool, decades before this announcement there was Steed and Mrs. Peel, by Grant Morrison and Ian Gibson, originally printed as a three-issue, prestige-format series by Eclipse Comics in 1990. Being unfamiliar with the original material, to which Boom! has presumably obtained the reprint rights, I and a number of other bloggers had reported it as presented--that Boom! had gotten Morrison to do a new mini. That some enterprising comic book publisher should find an opportunity in Marvel's upcoming film adaptation of their Avengers comics by releasing a comic book based on the spy team from ABC (nope--not that one, either--this is the Associated British Corporation) Weekend Television isn't a surprise. That said series--a six-issue mini titled Steed and Mrs. Peel from Boom! Studios--will be written by Grant Morrison? Well, that's pretty surprising. Since he took the Batman gig in 2006, he's been pretty exclusive to DC, and with both Action Comics and Batman, Inc. on his plate right now it would have seemed an unlikely time to see the superstar writer take a side job. Yet, that's what Boom! has just made available in a "visual press release: Morrison and artist Ian Gibson will be taking on the characters in a six-issue miniseries beginning in January 2012, meaning that it will be on the stands when Marvel's The Avengers hits cinemas in May. Since Steed and Mrs. Peel will be the prominent title, it's unlikely that the release is really timed to take advantage of the film, but they'll be on the shelves at the same time with "based on the hit TV show The Avengers" under the logo. That can't hurt! The Avengers first appeared on TV in 1961 and was most recently appeared on film in a 1998 film starring Sean Connery and Uma Thurman. Morrison has dipped his toes in this kind of story before, taking on a prominent '60s-style spy-thriller subplot in his creator-owned opus The Invisibles.

[UPDATED] Boom! Studios Teases AVENGERS Tie-In (Not That One, The Other One) Written by Grant Morrison