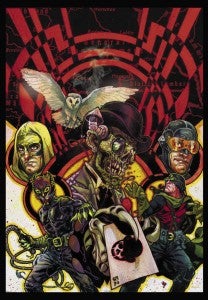 artist Tony Harris, who last month touched off an Internet firestorm following comments he made about female comic book convention attendees who he felt dress in cosplay gear and pretend to love comics just for the attention of undersexed geeks, took to his Facebook account today in the hopes of clarifying his earlier remarks. Harris says that his previous comment -- widely characterized as a rant and prefaced by "I cant remember if Ive said this before, but Im gonna say it anyway. I dont give a crap" -- was ill-advised only in terms of its language, that he stands behind the message, and that he intends to reiterate that message, minus some of the abusive language, following a number of threats of violence, boycott and some petitions to have him banned from conventions. This is, of course, fairly normal behavior on the part of fans who feel they're wronged in other media, but comics is such a small industry, with so many people just getting by, that efforts of this nature rarely get off the ground. There are a number of reasons for this, but one of them is likely that in a situation like this most people feel compelled to just apologize and put it behind them. Still, Harris says, he's not apologizing for his opinions. Despite the "second draft" of his statements being private on Facebook and no efforts being made by the creator to "get the word out" as he did last time (the first installment was posted as a link to Twitter with a request that followers retweet it), Bleeding Cool has already reposted it, and given the magnitude of the controversy last time around, it's likely to be picked up by nearly everybody else as well. Because, well, why not? The first time around was big enough news to inspire a Cracked.com column condemning Harris at length. So, what does Harris have to say for himself this time? Check it out below - and for your convenience, we're breaking up the paragraphs. It's incredibly difficult to read as one long box of text, which might be part of why so many people referred to it as a "rant," a characterization to which Harris objects.

Well I had hoped to NOT address this again, but it seems I am being forced to. I would have been fine to take my lumps like always. That's the price of being opinionated, and a quasi public figure, I guess. But this has taken a turn that is disturbing. First of all being attacked SO viciously and repeatedly, with exactly the same kind of name calling and insults that I was being accused of? That was just weird. But then, People started threatening physical violence, like putting a brick to my skull, and asking what my Con schedule was so they could beat me up or throw paint and blood all over me and my Art displayed on the table. As if that were not enough? Now its gone really to the back of beyond. People are asking that I be drummed out of the Comics Industry all together, encouraging others to boycott my work, and then today, sending personal emails to me announcing that petitions have been started, and letter writing campaigns begun to Comic Book Conventions to Ban me for life and NEVER invite me again. "Taking the bread OFF your table" is how they put it. Also, saying that they would create endless "Dummy" accounts so that I could never get rid of them by blocking, or the like. So I have asked all of my detractors MORE than once to not gloss over the opening of that original statement to just focus on my scathing language, etc… but NO, they will not. Then I reposted the "Rant" ( see below ) dialed back, without a single use of foul language, but still holding firm to MY OPINION, that there are SOME people that are attention seekers and nothing more. I even state below that I have heard it. I have seen it. Its not something I dreamt up. It simply cannot be refuted. My Dad always said, " The bit Dog Barks first." There seems to be a Lot of truth to that. I will not, nor will I EVER apologize. My opinion on the matter stands. But I will apologize for my delivery ( in regards to my language ). I need to be reminded that a LOT of people read this stuff, and not all of them wanna read those kinds of words. But if you still choose to say that I am lumping in ALL Cosplayers together in my statement below, then knock yerself out. But you will be a liar. "Something has been eating at me for a while now, so I felt compelled to speak up. I appreciate a pretty Gal as much as the next Hetero Male. Sometimes I even go in for racier material ( keeping the comments PG for my Ladies sake) but darn it all to heck, there seems to have been a growing cross section of the Cosplay community that seem to me, to be, well, less than genuine. But, I know a few of these fine upstanding members of that community, that are indeed bonafide fans of the Comic book medium, and express that through the careful construction of fine haberdashery, and oh so entertaining reality plays for all to enjoy. So here's something I'll put to you candidly: "Excuse me Sir/Madame, I am sorry to inform you that Some of us, in growing numbers , give pause when it comes to the sincerity of your current efforts to "Entertain" your fellow con goers. It occurs to me, that maybe, just maybe, you are not what you seem. You seem an attractive individual, but my years of experience, Travel and intuition (from behind the table , seeing and hearing so much that I am sure was not intended to be discovered) is telling me something is 'off'. Your willingness to almost completely disrobe in public can be commended on some level (confidence, perhaps lack of inhibition), but I fear your true nature to be duplicitous at best. You see, I have seen the mockery you engage in of the very patrons that seek your attention, and have heard the stinging commentary fall from your lips concerning the very same people. I fear they would be emotionally destroyed at the news, if it were put to them. If indeed you are acting out in an attempt at garnering attention and have been consumed by that notion, I feel sorry for you. Surely you have more respect for the modest gifts that God bestowed upon you, and you don't really need to exploit that. Ample as your bosom may seem to be, they are in fact quite pedestrian, in my opinion. One must be ready to receive criticism, sometimes harsh, if you put yourself 'OUT THERE'. I'm sure it can be very difficult for some Comic Book Fans who might be shy, or introverted to approach someone who seems so far out of the realm of possibility, concerning returned affection. Sadly I fear that they wouldn't warrant a passing glance from you outside of this Arena. Let alone a few kind words. You and your efforts to Garner Attention are not the face of comics, and honestly a discredit to those you aspire to be: True Comic Book fans/Cosplayers, like the creative individuals who craft the stories, and design the characters and worlds that we all hold so dear. But that's just this mans opinion, and I certainly could be mistaken. Good day"

At the end of the day removing the cursing and some of the more misogynistic language, but leaving the central conceit in place, really seems unlikely to do much to quell the objections to which Harris is referring. It seems, in fact, more likely to redouble the efforts of his detractors, because he's chosen to revisit the whole thing. Perhaps he'll be able to temper some of the more out-of-control commenters now, simply by virtue of the fact that his most stringent opponents will likely come to the table with an "It's never okay to threaten violence" message, but it seems unlikely that reiterating the same unpopular point he made the first time is going to prevent fans from threatening to boycott his work or chase him out of conventions through nonviolent means.

Burned by Controversy, Tony Harris Comes Back For More