How often does Steve Rogers die? Well, maybe not as often as Peter Parker, but it's not an insignificant number. With the recent revelation that he'll be dying yet again soon, it seemed like an ideal time to take some stock in it all. Let's take a stroll down memory lane...!

The drone plane The first "death" of Captain America, and the one that virtually every comic book reader knows about, is the time he appeared to have been blown up by a drone aircraft that he was struggling to deactivate. In reality, of course, he was thrown from the plane and frozen for decades in the frigid ocean, only to be recovered and revived by The Avengers. When he was revived, of course, it appeared as though his sidekick, Bucky Barnes, had in fact perished in his place. That, too, later turned out to be a misunderstanding. Following his death at the end of World War II, Steve Rogers was briefly replaced by the U.S. government, who assigned another man to play Captain America, keeping the icon alive in spite of Rogers's own apparent death.

Captain America #443 Following a period of time where Steve had to wear bulky, somewhat ridiculous armor designed by Tony Stark to fend off the effects of a badly-deteriorating super soldier serum, The Avengers arrived at his deathbed to find the armor empty.  With a number of the best minds in the Marvel Universe having had their shot at Steve, and everyone saying there was nothing to be done, Rogers was presumed dead. "On Olympus, we measure Wisdom against Athena, Speed against Hermes, Power against Zeus. But we measure Courage... against Captain America," Hercules famously said in a eulogy the next issue. Of course, the body had not simply wasted away to nothing. Rather, Rogers had been kidnapped by The Red Skull, who gave him a blood transfusion that saved the hero and brought things back to normal. 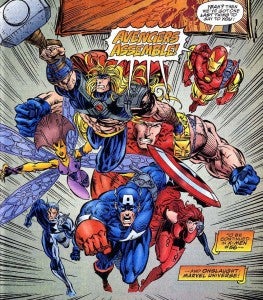 Onslaught/Heroes Reborn Following the introduction of the X-Men villain Onslaught (an armored being with the powers of Charles Xavier and the wickedness of Magneto at his disposal, for all intents and purposes), the creature presented an almost immediate threat to the future of the Marvel Universe. Separated from Xavier, its power ran wild but had no physical substance once its armor "shell" was ruptured. Captain America, along with dozens of other non-mutant heroes, threw themselves into the mass of Onslaught's energy basically to give the X-Men something to kill. The "death" was an illusion, though, as the heroes weren't destroyed but shunted into an alternate reality created by Franklin Richards. Eventually, once the "Heroes Reborn" story ran its course, they were brought back to the regular Marvel Universe. 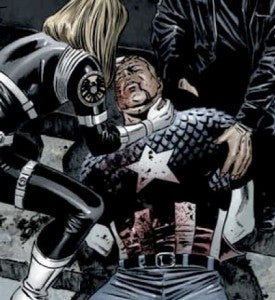 Captain America #25 The centerpiece of Ed Brubaker's long, best-selling run on Captain Americahinged on the death of Steve Rogers, apparently assassinated by Crossbones and Sharon Carter following the events of Civil War. One of the most exciting deaths in comics in a long time, this issue was remarkable in that it managed to stay mostly secret until Marvel spilled the beans to the press the morning of the comic's release. While many fans had expected Steve might not make it out of Civil War, especially because of the way #25 was being billed as a can't-miss Civil War epilogue, once the fighting died down and there had already been the "big sacrifice" demanded by an event story, it seemed as if the coast was clear. Following his apparent death, a revived Bucky Barnes took on the role of Captain America for a time, working closely with S.H.I.E.L.D. Agent Sharon Carter, who was carrying Steve Rogers's baby. Eventually, it turned out that Steve had not in fact been killed, but shunted through time and space. He returned and, shortly thereafter Bucky appeared to die during the Fear Itself event, setting the stave for Rogers to become Captain America again just in time for his movie to be released. ...And the one that almost was... 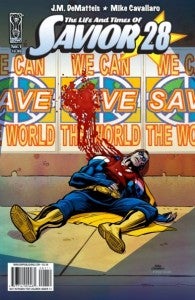 The IDW miniseries The Life and Times of Savior 28 features a character very different from Captain America--he's got cosmic-level powers and villains, for example--but the truth is, the story it tells was originally meant to be told in the pages of Captain America. Here's series writer and co-creator J.M. DeMatteis on how he almost had Bucky return and shoot Captain America, years before Bucky would return or Captain America would be shot:

Back in those ancient days of the early 1980's—I think it was '83—I was finishing up a year-long storyline that culminated in the death of the Red Skull.  I began to question where Captain America would go from there.  What would this man, who'd been waging war, punching faces, dropping buildings on the bad guys' heads, for (at that time) forty years, do once his primary opponent, a guy he'd been battling since l940, was gone.  Knowing Cap—well, my interpretation of Cap—it seemed logical to me that he would have reached a point where he said, "Enough!  I've been doing this for four decades and it hasn't made the world a better place or me a better man.  Violence is a dead end and I have to chart a new course."  This would also allow me, as a writer, to deal with my ambivalence about the role of violence in super-hero comics, something I've always been extremely uncomfortable with.  Don't get me wrong, I love these characters—they resonate on so many wonderful, mythic levels—but most super-hero stories come down to two guys in costumes beating the crap out of each other.  Not exactly the most enlightened point-of-view there is.  In fact, it's a fairly stupid and destructive one. I worked up a proposal for a pretty massive arc that would find Cap becoming a global peace activist.  (Which would freak out both the government and his fellow super-heroes.)  It all culminated in Cap's assassination at the hands of Jack Monroe, the Bucky of the 1950's.  Now this was a fairly radical idea for its day—but my editor, the late, great Mark Gruenwald, liked it and was willing to go out on a limb with me.  Jim Shooter, on the other hand, was totally against it.  (As editor-in-chief of the Marvel Universe, and custodian of those characters, he had every right to feel that way.  And, looking back, I can understand why a story that questions every super-hero's reason for being wouldn't work within the context of that shared universe.)  So the idea went down in flames...and I've been playing with it—peeling it apart, putting it back together—ever since.  Trying to find just the right vehicle for the idea.

For more on that, check out my full 2009 interview with DeMatteis.

Captain America and the Many Deaths of Steve Rogers

Nintendo Switch OLED Video Compares it With the Current System

My Hero Academia Cosplay Explodes With All Might's One For All