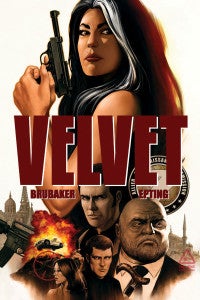 Today at the Image Expo, Image Comics announced Ed Brubaker's next project for the company--and for this one, he's bringing longtime Captain America collaborator Steve Epting with him.

They're teaming with Fatale colorist Bettie Breitweiser for Velvet, which revolves around Velvet Templeton, a mysterious woman posing as a secretary who secretly hides a past as a spy.

"I originally had the idea for Velvet about eight years ago, and spoke to a few other artists back then about drawing it, but it never came together," Brubaker told Nerdist. "I was really busy on Marvel work and prepping for Criminal, so I set it aside, but it kept nagging at me. I kept going back to my notebook and expanding it, thinking of characters and ideas and new plot paths. Sometimes that’s how it is, you have the initial idea and you don’t do it, and it just keeps growing in the back of your mind."

He said that Breitweiser had been one of the first names he considered, and that Epting came later, once the two had worked together on Marvel before.

After all, it's pretty clear he can do the spy stuff.

"Steve and I have done some big projects together and established ourselves as a team, I think, but I want Velvet to stand apart from that stuff, too," Brubaker said. "I don’t just want to retread what we did on Captain America, stylistically, but I also want it to have some of that same feel, obviously. So it’s been harder than I imagined. I think we both feel like we have to push ourselves to make it better and more interesting than anything we’ve ever done before."