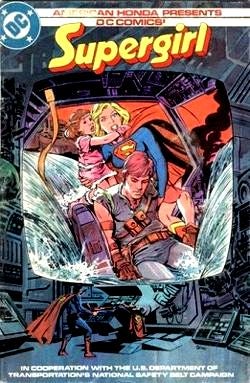 For this installment of Dollar Bin Discoveries, we turn to a cautionary tale from the 1980's, a decade famous for many things, particularly "very special episodes". In a column a couple of months ago, I wrote about famous cause/issue comics, comics that addressed social issues such as drug abuse, African hunger and so forth. I must admit that I hadn't realized that Supergirl had joined in the fun when I wrote that piece, so I now amend my oversight with this entry in Dollar Bin Discoveries.

Summary: Our issue begins with Supergirl trying to help stop a truck from falling off a bridge in the wake on an earthquake on the west coast. After saving the driver, whose truck is full of dynamite no less, she realizes that there's too much to be done out there, so she calls and cancels her date with her boyfriend, Steve, who apparently is used to Linda Danvers, Supergirl's secret identity, canceling on him. In a bit of "I'll show her", he decides to take his much younger sister to the movies instead (insert creepy pause here, now scratch your head).

His sister insists he put on his seatbelt as they head to the movies. Steve assures little Ellen that they're not that far from their destination, the horror movie equivalent of checking the noise downstairs, and as they head out a drunk driver hits them at an intersection. I have to say that the art in this scene is quite compelling, with pictures of Ellen and Steve hitting their heads on the dash and steering wheel communicating pain and hurt effectively. Flashing forward a bit, we see Steve lying in a coma and little Ellen worried about big brother. Supergirl feels helpless, flies out to the Fortress of Solitude to get some peace and tells Superman, who just happens to be there, that she's done being Supergirl after this incident.

Superman convinces her otherwise, and just happens to have a device, of course, that allows him to travel into the subconscious mind of others. Supergirl decides to journey into Steve's mind to tell him Ellen is ok, and hopefully he'll wake up. I have to question if there is a bit of sexism present here; would Superman have had a similar feeling of giving up had something like this happened to Lois?

What follows is Supergirl observing three bizarre scenarios in Steve's mind, where he's a Viking, a jungle safari hunter and finally a private investigator, a logical progression of career paths, certainly. After finally learning to buckle his seat belt in the third one, he awakens in the hospital to see his little sister standing by his bed. All is well in Supergirl's land, and Steve even wants to see alter ego Linda Danvers again.

Issue Worth?: The artwork in this issue certainly helps illustrate the points about seat belt safety that American Honda wants to communicate, and the story is a pretty good vehicle, no pun intended, for the message. The bit about the subconscious mind and the different lives Steve is living out in each as he struggles to wake up are pretty odd, and certainly don't help, the same as Superman's awkward appearance as a plot device. The safety quizzes and discussion points in the back might be good for kids though, the target audience of this piece.