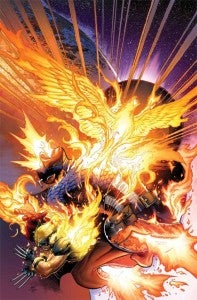 June is busting out!  It's the first official week of June, and with that the kids will soon be out of school and running amok.  Keep them occupied, and reading, with some of these fresh comic books, which will be landing in your local comic book shop tomorrow.  There's plenty to keep you occupied this week, so take the money you don't have to use for their lunch now that summer's here and get these four-color adventures instead!

Avengers Vs. X-Men #5  The battle goes to the moon and back, literally, as the first act to this company event continues!

X-Factor #237  Murder and suspected suicide are afoot in this issue, proving that not ALL X-titles are AvX connected.

Uncanny X-Men #13  Speaking of AvX, Mr. Sinister reveals what he's been up to while all these heroes beat on each other.

Earth 2 #2  More on the world that was is revealed here, and hey, the new Green Lantern!

Detective Comics #10  More is at stake than just Batman's life when he squares off against the enigmatic Hypnotic.

Red Lanterns #10  The surviving members are off to face the Star Sapphires, and it won't be settled over a game of softball!

Dial H #2  See what other interesting heroes answer the literal call for justice with the second issue of this intriguing series.

Before Watchmen: Minutemen #1  Delve into the history of one of DC's most iconic series and its characters here!

Green Arrow #10  Get a good sense of the title here with this one-off issue as GA faces Doctor Cognate.  Oh, and a mess of robots for him to shoot!

Batwing #10  Batwing faces a merciless pirate gang, while Batman guests to face one of his adversaries in China.

Spawn #220  Celebrate the TWENTIETH anniversary of the character that helped to put Image on the map.  With multiple covers no less!

Hack/Slash #16  "The Good Son" story arc begins here, and this family reunion will be anything but pleasant, as Cassie and Vlad head to Chicago.

Epic Kill #2  Sure, doesn't every President grab some weapons and join a teenage assassin in the wilderness?

Creator Owned Heroes #1  It's a twofer!  Two great stories in one book here, and a Neil Gaiman interview!  You can't lose!

Extermination #1  In this new series, the aliens have won in an invasion of Earth.  Now, the planet's heroes and villains must team up to stop them.

Fanboys vs. Zombies #3  Hey, with all the zombie bath salts stories in the news these days, this could become a reality.  Read up!

Garfield #2  See, Boom DOES publish lite fare.  Pick up this issue and be delighted!!