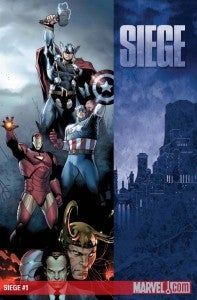 Happy New Year, comic book fans!!! Perhaps you've made some resolutions for the newest decade of the 21st century. Weight loss? Better time management? Read more comics? Number three is always an easy one!! Thankfully the good folks in comic book publishing are here to help hold you to it! Marvel kicks things off with the highly anticipated Siege #1! One of the events that we've been told has been in the works for years as Norman Osborn sets his sights on Asgard, home of the Norse gods!! Loki's hand is certainly in the midst of all this, and perhaps an even bigger issue is at hand here: is nothing out of Osborn's iron grasp? Begin reading here to find out!! Speaking of worlds, the newly formed mutant island Utopia is opening its arms to X-Factor this week in the pages of Nation X: X-Factor #1. Will the mutant detectives accept the offer, though is the big question! Cable #22 shows us that Hope, the believed savior of the mutant race, is ready to rejoin the X-Men in the present, but can she and Cable get back? Damn that broken time machine! The pages of Spider-Man Noir: Eyes Without a Face #2 takes us back to the 30's, where Spider-Man finds himself awash in the mania of the times and the American Nazi Party! Want more back-in-the-past fun? Be sure to read Marvel Boy: The Uranian #1. A new person is running along in the Jackpot costume in this week's Amazing Spider-Man Presents: Jackpot #1. Who is it? Why is Boomerang after her??

DC offers up some similar action and thrills, as Justice League All-Stars returns with its second issue. Also, welcome back to a familiar group with this month's Suicide Squad #67. Yep, you read that right! Look for some surprises when a pissed-off Fiddler rises from the dead, gunning for Deadshot! Oh yeah, Amanda Waller's in this one too! Sam Kieth begins his four-issue run with Batman Confidential #40, writing and drawing this new story arc! Superman and Adam Strange appear to have their hands full in this issue of Superman: World of New Krypton #11. The tension is building in anticipation of next month's explosive finale! After facing a very undead Maxwell Lord, Wonder Woman is back this week with Blackest Night: Wonder Woman #2. More dead from the past come back to haunt the Amazon in this issue! Be sure to check out Doom Patrol #6 also, as Negative Man attempts to explain it all to us. Uhm, yeah. 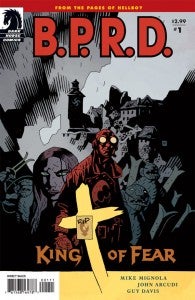 Not to be outdone, Dark Horse gallops strongly this week, starting with another entry into the B.P.R.D. universe with the release of B.P.R.D.: King of Fear #1. Mike Mignola gives us another cracking supernatural adventure, as the team must put an end to the frog problem from Hollow Earth, among other adventures, even Lobster Johnson! This series will conclude the Scorched Earth trilogy, so get onboard! Also this week is Mass Effect: Redemption #1 , a follow-up to the smash Xbox 360 game! And hey, don't forget, Star Wars: The Clone Wars #12 is here!! Image Comics also has some issues to watch for this week, especially with Orc Stain #1, the story of a one-eyed orc who can find the weak spot in anything! How will he react when the whole orc world is in peril? God Complex #2 continues the newest story of the mighty turned mortal, as a god attempts to live on Earth! Lost about the world of Dead@17? No problem! Dead@17 Sourcebook will give you the who's who and what's what of each character! Oooh, and don't miss Haunt #4! Kill Audio #4 is back, thanks to Boom! Studios, along with issue two of another new series, Dingo. If you missed issue one, catch up and get into this new series focusing on a man who just can't seem to shake some problems, some with magic no less! Need something lighter perhaps? Check out Donald Duck and Friends #349 or perhaps Mickey Mouse and Friends #299. From Dynamite, we see the release this week of The Boys #38, Queen Sonja #3, Athena #4 and, last but not least, Buck Rogers #7! Wow! So get to it! Read comics and help keep up the economy, your resolutions, and, well...maybe you don't need a resolution!