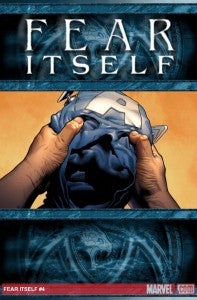 Rise up off the couches from the post-holiday cookout bloat and rush out to the comic book shops this week, because a LOT (and I don't use that term lightly) that you'll want to pick up is hitting store shelves! First, from Marvel comes Fear Itself #4, the follow-up to the shocking and gory events in the previous issue. See how the fallout from the death of (SPOILER) Bucky/Captain America (END SPOILER) is handled here! There are also some big tie-ins to Fear Itself as well out this week, with Uncanny X-Men #540 showing the mutants against a vastly more powerful Juggernaut! Speaking of mutants, Fear Itself: Uncanny X-Force #1 also sees release this week in case you need more big event tie-in madness! It's raining terror and loose inmates over in Thunderbolts #160, as they continue to clean up after Juggy's rampage. Ultimate Fallout #1 picks up the pieces in the wake of Peter Parker's death in the Ultimate universe, and Spider-Girl ends with issue number eight, as Anya Corazon's adventures here come to a close. Last but not least in ANY way, Captain America #1 launches into the next chapter for Steve Rogers and his adventures. When one Cap falls, another must take his place! 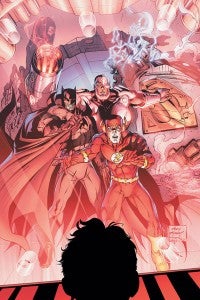 DC Comics are not to be outdone when it comes to big events, and Flashpoint #3 arrives this week as well! Will the Flash and the heroes around him be able to fix what has gone wrong in this new world? How will DC's big summer event continue to unfold? Keep reading! Also in Flashpoint news this week, some limited series not to be missed, with Secret Seven #2, Batman-Knight of Vengeance #2 and Abin Sur: The Green Lantern #2 all connecting back to the big event! Secret Six #35 brings us the next to last story to be told in this tale of Bane's renewed anger towards Gotham City! Batman and Robin #25 bows this week, alongside Adventure Comics #528, where it's "Graduation Day" for the Legion Academy seniors, of sorts! Also look for Sweet Tooth #23 ! 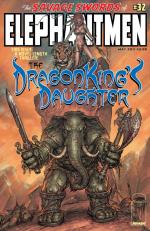 After a jump ahead last month, we jump back with Image Comics' latest issue of Chew, issue nineteen. How did we get to the eight-issue leap ahead from last month? I guess you'll have to read this installment to find out! Also out this week, Richard Starkings Elephantmen #32 and part two of the Frank Cho/Doug Murray penned 50 Girls 50. Also from Image this week, the first issue of the six-part mini Mysterious Ways. Dark Horse brings you some serious bang for your buck, with Doctor Solar, Man of the Atom #7 arriving alongside Conan: The Frazetta Cover Series #8! And let's not forget Solomon Kane: Red Shadows #4 , which brings this globetrotting mini to a close! Boom blasts us this week with the always impressive Irredeemable #27. The critically-acclaimed series keeps rolling as Plutonian's revenge on Earth and the Paradigm are very real! Elric: The Balance Lost #1 starts the new adventures of a character who has been known and loved for decades! Be there as Elric takes on a quest to restore order and balance in the multiverse, with LOTS at stake! Over at Dynamite, The Boys #56 hits shelves, alongside Kato Origins #10! So....as you can see, TONS of stuff to read this week. That ought to help burn off some of those post-4th of July calories! Just be sure to turn lots of pages! Happy reading!