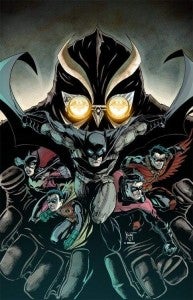 We already know that Scott Snyder plans to bring the Joker right to the front and center of the Batman universe with issue thirteen of the series, but what else is in store for readers of Batman and the family of Bat-books?  I’m here at the DC: Batman, Beyond the Night of Owls panel to get some answers from those who can tell us just those very things!  A packed hose was on hand, and the audience was ready to go on finding out all the panel could share about the Bat family of books.  Keep refreshing this article to keep up with the latest news!

While the event was concentrated the most in the Scott Snyder-penned Batman series, ost of the other Bat-books included either direct stories that dealt with the arc or had tangential attachments to it.  On hand to discuss what would happen in the wake of this big event and join Snyder in giving us all the info were Batgirl scribe Gail Simone, Chris Burnham from Batman, Incorporated, Tony Daniel of Detective Comics, Nightwing’s Kyle Higgins, Gregg Hurwitz of Batman: The Dark Knight, J.H. Williams III of Batwoman, and Batman group editor Mike Marts.

Discussion began with talk of the upcoming Talon.  The launch will be in September with the zero issue, and Snyder had this to say about the book, "It came about due to working on Court of Owls.  DC approached me about doing a spin-off and I didn’t want to do more than was there.  The character, Calvin Rose, is the one Talon who escaped the Court.  It will show you the depth and development of the Court itself. "  the writer, James Tynion IV, of the series expressed excitement for the upcoming project, and this is his solo .  Snyder mentioned, "Doing a story with new villains is risky, and we appreciate the support you guys have given us with the story and these new villains."

Batman #0 was the next topic of discussion.  What do we learn?  "When the zero stuff came along, I was wary, mainly because the year one stuff is so sacred.  The Gotham you will see in Batman #0 is different.  You'll see different villains, a different Batcave and a different kind of tech.  We'll add some stuff toe the mythology without stepping on the past." The Joker was next, “This is my exploration of what I think makes him interesting.  In his mind he is Batman’s court jester.  He seems him as someone that makes Batman a better man.  He has a grudge, he has traps, and this will be the most probing and darkest story we can do with the Joker.  It’s delving into what makes him special.  I hope this will be our “Killing Joke,” our “Arkham Asylum.” As a team, they all discussed how the Joker will factor into this story, with the Joker terrorizing whomever he can to punish Batman for "forgetting him."

Nightwing was next.  Kyle Higgins discussed the upcoming zero issue.  "I latched onto this idea that Dick Grayson is a character who always looks forward and not back.  After his parents died, that quest to move on was interesting.  That decision to become Robin is something that we're putting a little bit of a twist on.  Issue thirteen of the series will introduce Lady Shiva, and Tom Defalco will be writing issues thirteen and fourteen.  I'm going to be working with the Joker, so I'm excited about what he has in store for our book.

Gail Simone talks about Batgirl #0  "We learn what her motivations are for becoming Batgirl.  Why is she doing it?  How does her father feel about this."  The Batgirl Annual was teased, with the cover featuring Catwoman the and female Talon that Barbara faced earlier on.  Ed Benes will become the artist for Batgirl beginning with issue thirteen.  The new Batgirl villain Knightfall was discussed, "She's like an opposite of Bruce Wayne.  You have a young girl who has a lot of money but who has this dark side to her.  We're going to be seeing where this goes."

Batman: The Dark Knight was up next, and the zero issue took center stage again.  Gregg Hurwitz talked about the character he wanted to tackle with this series first.  "Scarecrow to me is a dark mirror to Batman.  That cover to Batman: The Dark Knight #10 to me is one of the great things.  In issue zero we're going to go back and show the influences and life of Bruce Wayne.  There's pieces that we can dip into and explore, and we've done that with the zero issues."  He reiterated that Scarecrow will be a key part of this book for awhile.

J.H. Williams jumped in then to discuss Batwoman #0.  "It was weird for us to return to her origin so soon after her run in Detective.  This story is different visually, and even though we got her origins in "Elegy," we still thought there was room to explore and develop what we had seen before.  We're starting to get into her head and see all those developing events from her point of view.  Another thing we're excited about is that we're going to get to go into her father's past in regards to all of this and his motivations for going along with his daughter's crusade to be a crime fighter. "  Wonder Woman was shown to be teaming up with Batwoman on the cover of the thirteenth issue. Williams also mentioned that Wonder Woman would not be just a one-issue fluke.  "We've been building to a lot of stuff since the first issue and you'll see how that goes after that guest arc with Wonder Woman."

Scott Lobdell discussed the sadness of writing about Jason Todd in the zero issue of Red Hood and the Outlaws.  "There's no Red Hood at all in the zero issue.  It's a very, very sad story about how Jason became Robin.  I went back far with him and I'm shoing how he's developing."  Moving on, "All your expectations about who Blackfire is will be upended, and I couldn't be more excited about introducing her into the new 52."

Batman, Incorporated was on the agenda next.  Chris Burnham said, "this is the origin of how the team got together, why Batman called them together.  There's a lot of clues in here about things that will be paying off later on.  We're going to be returning to the world of Batman #666 with the fifth issue of Batman Incorporated."  In Detective Comics, Tony Daniel mentioned, "We wanted to be interesting and talk about a story during those lost years in Tibet that ties into something that is a sort of violent version of how Bruce Wayne approaches intimacy.  I wanted to show a story that really details how that happens.  It's a bit of a thriller.  It's emotional, and it explains and deals a lot with why he stays isolated in that big castle on the hill."

Attention turned to another and more complicated part of the Batman universe, Catwoman.  Selina will be headed into new places, with some teaser images that the Joker will be making an appearance in Catwoman's world with issue number thirteen.  Questions from the crowed then became the focus of the next piece.  Scott Snyder was asked what the time frame was between the end of Court of Owls and the return of the Joker.  "Bruce will get a slight breather.  Issue twelve is a one-shot that will focus on Harper Rowe, a character we saw earlier." An interesting question was about the sexuality of Catwoman.  The response was that she's really DC's only femme fatale and that they can use her that way in the DCU. Another question focused on the realistic sexuality of Batwoman.  Williams said, "we do our best to treat these characters as people we might know.  We try to make them three dimensional.  It's going to make a real impact on everything else.  By that course, the crazy stuff that happens seems that much more realistic.  What I like about doing that in Batwoman's world is that we have so many contrasts between real and the crazy/supernatural.  We take a character with no superpowers and a serious individual and put them in that context.  It's pretty unique."  Simone chimed in, "we're exploring that unsure, developing side of Batgirl.  With Batwoman crossing over into Batgirl, we're going to see just how different these two redheads in a batsuit really are."

Comic-Con: Beyond Batman's Night of Owls. What's Next?