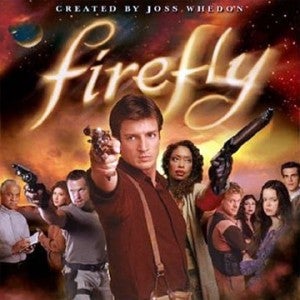 Arguably one of the most anticipated parts of this year’s Comic-Con International is the panel devoted to the ten-year reunion of the cult Joss Whedon series Firefly.  It’s been quite some time since the Serenity first took flight on the short-lived television series, but anticipation and excitement about the panel for fans was high before the event even got underway.  Science Channel has brought together for the first time ever the crew of that fateful series for this special panel.  Fans began staking out a claim to Ballroom 20 for entrance to the event early, and buzz was in the air even before the first word was spoken.

With a much needed and enthusiastic round of applause, the panel got underway as a clip show featuring pieces of the television series played across the screens set to some more modern music lips, which previewed the upcoming ten year special airing on Science Channel this November.

Writer Jose Molina joined the panel, along with executive producer Tim Minear, with Summer Glau, Nathan Fillion, Adam Baldwin, Alan Tudyk, and Sean Maher getting amazingly enthusiastic standing ovations as they each entered the panel room.  Whedon came out as well an spoke first, "we were doing the right thing, with the right people, and the right cast.  The popularity of this shows goes beyond vindication.  I love that people still get so much from this show." Fillion said, "Firefly was a big chance for me.  It went from "can he carry a show" and Joss gave me the best character I've ever played, and I'm so happy about that."  When Firefly started, what did Whedon want to create?  "I wanted to create something that would break with history.  I wanted to tell an American immigrant story, I wanted to tell a Western story, but I need spaceships or I get cranky."  Tim Minear said, "I was geeky kid growing up.  I went to cons, and when Joss, the coolest guy in geekland said "help me with my show", I had to do it." Whedon said, "I promised I would never take Tim off of Angel, but Marti Noxon said, 'you need him on Firefly or that show will die as will the others.  She was so right, we needed him."

For Jose Molina, what was it like as a writer on this show?  "It was like being a pig in shit honestly," he laughed, "I had been an assistant on Buffy and Angel, and then Firefly came along after my first gig, and I was invited to play in the sandbox.  How hard to you geek out, how much do you push your own tendencies, and mine are rooted in Star Wars and Star Trek.  We were asked first to watch a lot of Westerns.  It was literally a dream come true to write on this show, and completely heartbreaking when it went away."  For Sean Maher, was it easy being dropped into this?  "The first thing I said to Joss was 'tell me about this world,' and I got to hear it from his mouth.  I never thought of it as science fiction.  "Ariel" is one of my favorite episodes of that series."

The cast really seemed to love working together and the chemistry was key to that.  Fillion said in response to that, "could you repeat the question," after some laughter, Tudyk talked about how it became a game to learning everyone's name.  "The game brought everyone together because we were all walking around trying to learn who the other was."  A question for Adam followed, but a clip to set it up played first, focusing on the significance of his hat. "A woman in the office knitted and made hats, and I made a conscious decision to talk to Tim and try to include one of these hats into the shoot.  I was able to use it to take if off at the end and this hat was just a golden thing."  The famous hat, a replica in this case, was then given away in a trivia question game that seemed to take awhile to get an answer to!

Summer Glau was up next, with an introductory clip showcasing River.  What was the key to playing her? "I had to think of myself at 17, which was only about two years before!"  Whedon was asked what made her perfect for the role. "As I've said before, these people are the finest puppets I've ever controlled.  It's hard for me because I do remember the audition process, and it was a long, ghastly process.  And yet, I think at some point, it just kind of hit me as to who I wanted for the show in general.  Summer is so crazy!  The amount of strength and vulnerability that she can communicate is just amazing to me." For Nathan Fillion's casting, Whedon jokingly said, "You have to make compromises at some point," which got a big laugh.  "I haven't watched the show in awhile," he continued, "and I'm sad that the rest of the cast couldn't be here.  I wish they could be here, and I'm so sad that we can't be together here.  When it came to Nathan, I know no matter what I say here he's going to make a face, but there was never a moment from the time we met that I did not think he would be perfect.  Everyone knows that Nathan is the captain.  He's there to make sure that everyone is doing their best, having the best time, and the captain of a ship and the star of a show have to do that.  Not every star can do what Nathan can. We saw that when we had a guest actor come on set and be disrespectful of our female stars and he got really defensive and protective of his cast."

The fans were the next piece of this.  Baldwin said, "the fans never gave up on us, even when we had trouble getting the movie off the ground.  One of the highlights of my life was seeing that show resurrected as a major motion picture.  They never let us down."  Whedon chimed in as well, "I sometimes look back and look at Serenity as one of the finest nervous breakdowns a man can have.  I was inconsolable.  It changed me, and it changed the way I work, the way I do things, and I knew I wanted to work with them again."

Audience questions came next.  What is a favorite fan story the cast has?  Baldwin said, "I enjoyed going down to the line last night and seeing the fans waiting in line to get in and meeting with them.  I even got a cupcake!"  Fillion said, "I watched a woman walk up to Joss somewhere and then she walked away in tears.  It always warms my heart when people say that the show touched them, or saved their life in some way."  Could Firefly ever become an animated series?  "I get it," said Whedon, "but I'd love to do it as a radio show!" Which he then followed up with as a demonstration for the audience with some of the cast playing along.  The next question dealt with the fusion of Asians and Asian-American characters.  Will more Asian characters be on the way? "It's not a mission statement in terms of who I'm casting with a particular thing, but it was a mission with this show to demonstrate that those incorporations do happen with groups of people.  When I was saying immigrant story, I wanted to show the way the cultures looked back at things.  I got a lot of flack from one Asian journalist who kept asking why I cast an Asian woman as Sean's sister."

Is there any resentment or disappointment over why there wan't more enthusiasm for the show when it was on even though there is a lot for it now.  "That was never a question.  the twenty-seven people who saw it when it aired loved it," said Whedon.  "When Firefly died I thought it was the worst thing that could have happened.  The worst thing now, as I look at this room, is that it could have stayed dead," said Fillion. A fan asked if any of the panel had ever camped out for anything themselves, "camping" was Whedon's reply!  Last question, how would the series finale have differed from Serenity if he had known it would be the last episode?  "Not many people realize that when Firefly was being made it had a lower budget than Buffy and Angel.  I think apart from that, one thing that if I knew it was the end, I don't think I would have killed anybody," which got thunderous applause from the crowd and pumped fists from Tudyk. "We would have delved more into the Blue Sun conspiracy in the film, and we would have learned more about many other pieces."

To finish, Whedon tearfully told the crowd what the fans meant to him.  Before he could even speak, a long standing ovation preceded him as he searched for the words he wished to convey. "Only an idiot tries to follow that with words.  When you try to tell a story, you try to bring them into a world.  The way you guys have inhabited this universe, the way you are living in Firefly.  When I see you guys, I don't think the shows off the air, I don't even think there's a show.  It's reality."