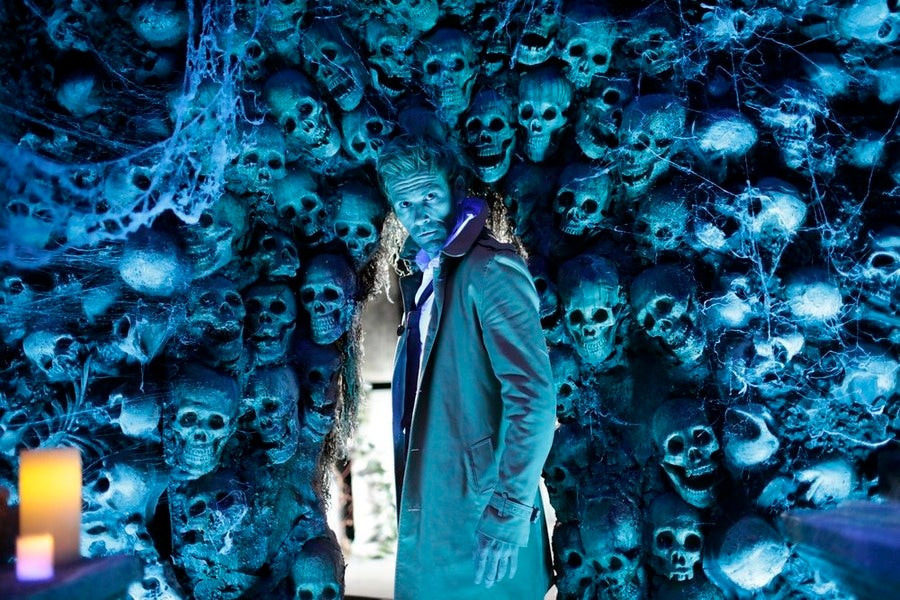 The episode opens on the exterior of a house, where you hear what sounds like a man beating his wife, complete with crashing furniture, screams and angry shouts. In another room, a baby is crying. Inside the house, it's ransacked, blood everywhere, and a large man floating in the air, bloodied. A little girl sits huddled in a corner, holding her knees to her chest in fear but largely unharmed.

Later, the police arrive. The little girl, Emily, is sitting with one of the cops who has come to take a report, when another tries to bully her away from the child to talk to their superiors. As the female cop makes her case to the male cop, a coffee cup on the counter explodes, seemingly without cause, alarming both. The man moves on and the woman goes back to comforting Emily.

Constantine wakes up in a woman's bed; she's panicking and trying to hurry him out the door. Her boyfriend is coming. Constantine, still drunk, says he didn't even know she had one, then makes his way out the window and down the driveway, half-dressed.

In the mill house, Chas comes and tells him that they're working together without Zed today. Constantine examines the map and finds a fairly fresh blood spot over Birmingham, Alabama.

The pair arrive at the house from the cold open; Constantine heads inside to look for evidence, sending Chas to the car to wait for him. When he's inside, he's startled by the sudden appearance of Manny. He's pressuring John to get moving on the Rising Darkness, and Constantine asks him why they've come to him and Manny says it's a bit of a desperation move. Constantine asks him why Emily was spared. Manny won't tell him, and so he uses a burning piece of parchment and a Mayan incantation to see what went down. He sees the little girl and the cop get up to leave, and an entity stay behind. Apparently, it had possessed Emily and is now looking for a new host.

A boy wakes up screaming, and his parents come in to check on him. His name is Henry, and while his mother is understanding about his night terrors, his father doesn't have much patience for it. His mother tells him that this happens every Halloween; that last year, he didn't want to trick or treat because he was afraid of monsters. His dad wants a tough love approach to prove to his son that he's stronger than he thinks he is, handing him a creepy mask. The pair leave the room. Outside, an entity moves into the house, finding Henry. The boy wakes up, startled, but then sees nothing and turns his light back off. When it's dark, he sees a figure in the window that comes closer to him. He screams.

When his parents come in to see him, Henry says that he doesn't know why he screamed, and that they can go back to bed, since he feels much better.

At a bar, Constantine meet sup with a paralegal who tells him the little girl is in protective custody. There's been a string of nearly-identical killings. Over the course of 35 years, there had been three, and then three more in the last few weeks. He wants to find out if any victims remember the name of who possessed them, and he's directed to find one of the adult victims...at a mental hospital.

Constantine goes to see the man, named Marcelo, who is locked up having been actually accused of killing his parents. The orderly explains that he was beaten as a kid and that he "soaked up" the evil his family subjected him to. He's missing parts of his fingers where his father had apparently cut them off with the axe he later killed his family with. The man appears mostly catatonic, though, and won't respond to Constantine.

Back at the house where Henry has been possessed, his father comes into his room and starts looking for him. After wandering through the dark for a few minutes, he finds a number of light bulbs on the floor. An overhead light fixture explodes in sparks, scaring him, and he stumbles around, crushing some of the bulbs and falling from the pain. Henry shows up, and his father asks if he did it. He denies it, saying he just came in and found it like that, and then leaves, holding onto a flashlight.

At the mill house, Constantine has given up on following up with old cases and wants to find and prevent the next killing. He discovers that the crime scenes over the last thirty-five years have been along the same ley line, and deduces that they can find where the spirit will strike next by following the line.

On his way home from school, a large dog pulls at its leash, barking hysterically at Henry. He stands and watches it, unfazed, until the dog sufficiently chokes itself on its collar to tire it out and make it docile.

At the mill house, Constantine is looking for something in the library that will detect the spirit. Chas picks up a sword, asking what it is. It's the Sword of Night, which compels the bearer to speak the truth -- something Constantine tells him after Chas has already started into an ill-advised bout of verbal diarrhea. Finally, Constantine finds a jeweled box, saying he can't explain what it is and that Chas will see -- but that he needs some frankincense.

At Henry's home, his mom brings out a tray of pumpkin seeds so they can make their jack-o-lanterns. When she goes inside to get the markers, however, she comes back to discover he has mangled the pumpkins and refuses to return the knife. Ultimately he does, and she takes it inside, but as she's entering the house, he nods his head and a crow flies past her and kills itself against the glass door right in front of her.

That night, Constantine is using the frankincense to track the spirit; when he gets a bead on the house they want, though, they can't go asking after a little kid or the parents will never listen and they'll probably have the cops called on them, so they decide to sit and wait.

The next day at Henry's school, Constantine approaches a teacher while Henry is being bullied by another kid. He tries to get the teacher to intercede, but the teacher becomes more preoccupied with what John's interest is and why he's hanging around a school. While they argue, Henry psychically "pushes" the bully into a piece of playground equipment.

At home, his parents are trying to figure out what happened and why (the mother is a nurse where the boy was brought in with a fractured skull) when Constantine shows up, claiming to be a counselor from the school. He holds something out to Henry, and Henry screams, sending the item (a mandrake root, which evil spirits apparently don't like) flying. The parents start screaming at him to get out when he reveals his real reason for being there. When he leaves his business card on the table, Henry's father punches Constantine out. When we next see him, he's in jail, ranting at his cellmate, who turns into Manny. The pair argue for a while, and Manny finally tells him that he needs to remember what it was like to be a troubled child.

At Henry's house, when his parents start arguing about how to handle him, he melts down and sends most of his room flying.

His mother goes to see Constantine in jail, bailing him out so he can tell her the whole story. He tells her that it's likely a child who met a violent end, and the possessions are basically tantrums. They come to the idea that they need to bind the spirit to another spot, with Constantine telling her that she has to be part of a seance. He notes that she's a doctor...

At home, she gives Henry an injection of "vitamins," taking advantage of the fact that the spirit is in the driver's seat and doens't have all of his memories to convince it until it's too late for him to resist that she does it all the time. He passes out.

Later, while Henry sleeps on the couch, she leaves the house, her husband not particularly reacting. She goes to see Constantine, saying that the drive was longer than she expected and that they only have a couple of hours. Constantine takes her to a burned-out old house that used to belong to Marcelo. he wants to hold a seance and summon the spirit to the house.

They go into the house and Constantine gets a psychic sense that the house "knows they're there." They're set upon by a murder of crows who flap on out of the house. Constantine decides to hold the seance in the room where the murders happened. They have to hold hands and not break contact until he's recited the binding spell. They summon the spirit, disturbing Henry's sleep, and a three-legged deer hobbles into the room. Constantine says they're wasting time. Chas wonders whether Marcelo might have killed his parents himself and was never possessed. Constantine is resistant to that line of thinking, and to the idea of an exorcism, but Henry's mother insists.

He wakes up, putting on his costume. His father starts talking to him, but when his mother shows up with Constantine, the two start arguing and Henry psychically throws furniture at them. Constantine figures out that it's conflict that triggers the activity and starts attempting an exorcism, but Henry puts his mask on and runs. After trapping Chas between two cars, he heads into a house of horrors attraction, where Constantine follows him, barring the doors behind him. He wanders through it, holding a mirror (which had previously been effective at reversing the monster's spells) ahead of him. Finally he thinks he's found Henry, but it's an illusion and one of the creatures in the attraction pops up and breaks the mirror.

When he turns and sees Henry holding the ax taken from a fire box, he realizes that it's Marcelo who is possessing the bodies. After a squabble, he successfully casts out the spirit, sending it back to Marcelo's body, where he starts having a psychotic episode at the hospital. As the episode ends, Constantine monologues and lights up his cigarette.

Constantine Recap With Spoilers: The Rage of Caliban