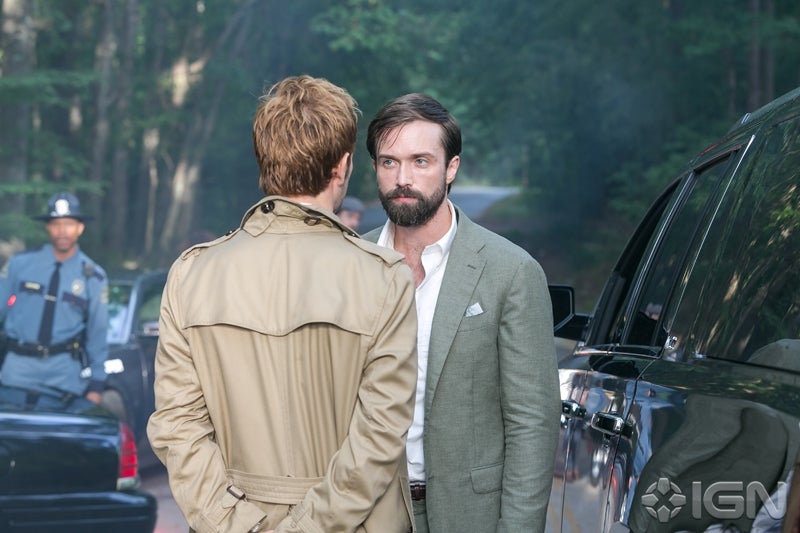 During a conference call with journalists earlier tonight, Constantine Executive Producers Daniel Cerone and David S. Goyer promised more DC Comics characters to come -- starting next week with an urban legends-themed episode of the NBC series which will feature the return of Papa Midnite and the first appearance of Jim Corrigan.

"There's elements of a zombie coming up for us," Cerone said. "But it's filtered through the world of Papa Midnite, so it's old school Haitian zombies, not the apocalyptic zombie virus that we're all accustomed to."

The producers added that the story will be a part of a kind of anthology episode, where bodies start to pile up that appear to be connected to urban legends, and police officer Jim Corrigan -- known to comic book fans as the future host of The Spectre -- will be investigating.

The image above -- one of the first looks at Corrigan's on-screen appearance -- is courtesy IGN.

"Within the context of this episode we realized we needed a cop character and right away we realized, 'Is there anybody in the DC world that we can add?'" Cerone explained. "We realized that Jim Corrigan is this cop very much like Constantine, very hard-charging, will do anything he needs to for the arrest."

He added, "We're seeing a bit of the origin story of Jim Corrigan, where he's seeing the world of the supernatural opened to him for the very first time....It came form a storytelling place; it wasn't about servicing DC fans, it was about trying to tell a good story."

The pair tied that to their overall philosophy on how to manage bringing in DC characters in a way that's accessible to non-readers who might be watching the show.

"The working rule of thumb that we've gone by is as fans it's exciting for us to introduce a character like Jim Corrigan," Goyer admitted. "He becomes another character called The Spectre, a supernatural figure eventually. It's fun for us as fans to get the character in there. We wont' do it unless it's organic to the story and we can introduce the character in a way that people who read the comics will understand who he is and won't be lost without his backstory. We need to make sure we do it in a way that stays true to the source material but doesn't alienate the broader audience."