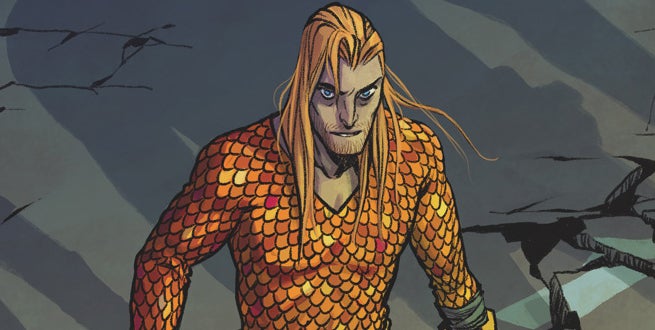 The world of DC’s Convergence event is a weird one. There are characters and cities from throughout time, throughout realities, from other worlds and eras.

One of those characters is the Aquaman of the 90s, with a harpoon hand and a bad disposition. He’s stuck in a Metropolis, domed and placed on a world he’s now been held in for a year. As he tries to figure out his place in this city, in this world, writer Tony Bedard is putting the character he once edited through the ringer, and up against a surprising foe. Bedard tells us more about these challenges, and why this Aquaman might just be more dangerous than even Batman.

Aquaman has had quite the resurgence in the last few years, arguably becoming a fan favorite – I mean, he just got his own animated film and has a live action movie coming up! When you look at the character overall, what makes him cool and gives him that potential he seems to be reaching? 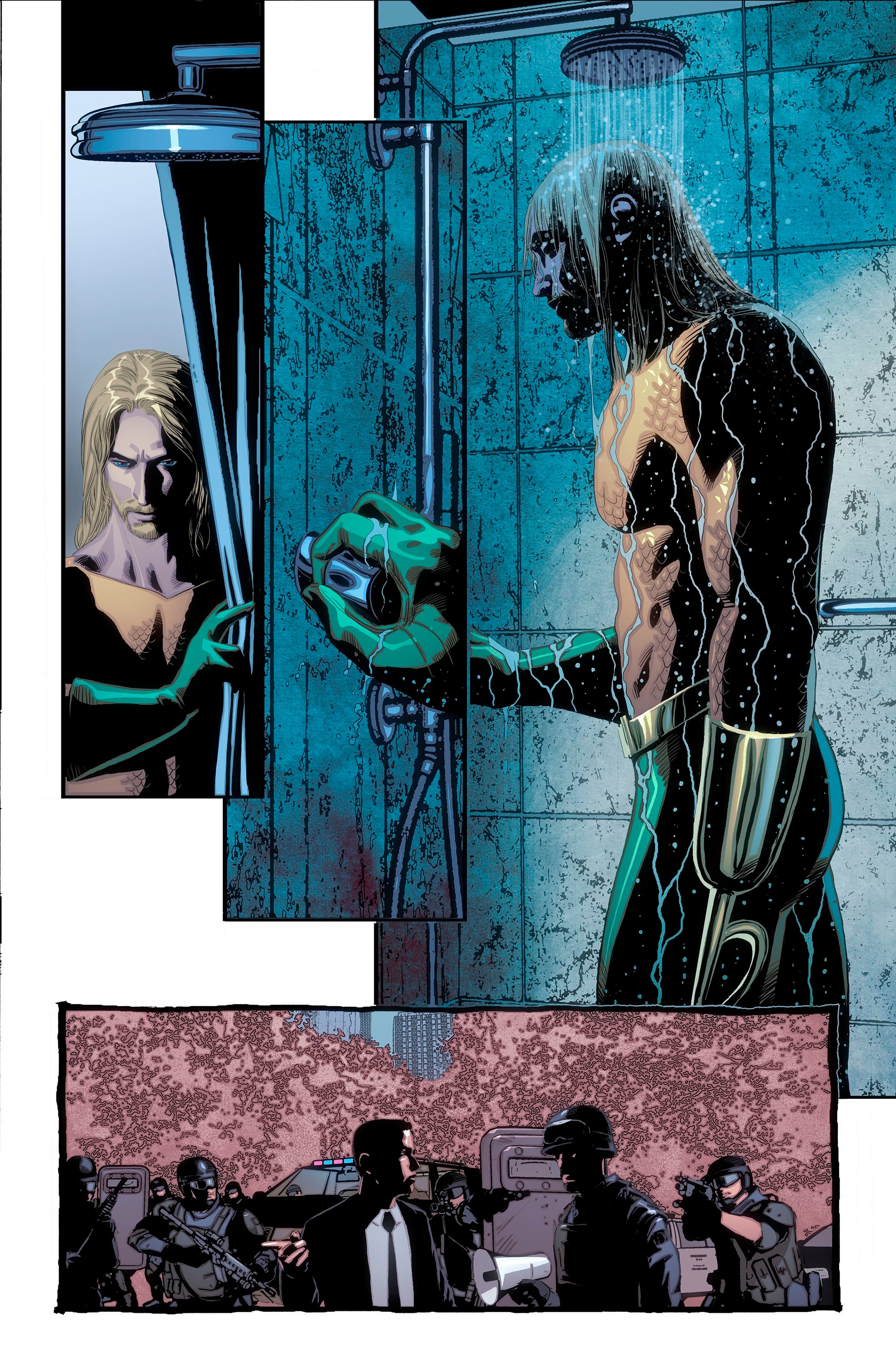 Tony Bedard: Yeah, Aquaman is definitely having his moment in the sun, but I’ve loved him ever since I was a little kid watching the old Superman/Aquaman Hour of Adventure. Yes, Aquaman used to share top billing with Superman on a Saturday morning cartoon, so I never saw him as a second stringer. It was kind of a shock years later to find that he was essentially the Rodney Dangerfield of the Justice League. No respect.  Maybe it’s because the ocean seems like such an alien environment, I don’t know, but here’s a guy who rules 7/10ths of our planet and yet nobody was giving him his due. Then again, I started reading comics at a time when guys like Alan Moore and Frank Miller were breathing new life into moribund characters like Swamp Thing and Daredevil, so when I’d look at a character like Aquaman all I saw was potential. I suspect Geoff Johns saw the same thing, as he’s totally brought Aquaman into the spotlight.

This particular era of Aquaman’s history was definitely marked by some extreme changes and challenges. What are the advantages and disadvantages of coming into a character from such a turbulent timeframe?

TB: Convergence: Aquaman is set just after Aquaman lost his hand. This was early in Peter David’s run on the series. It was the start of his shift from the clean-cut smiling blonde in the orange shirt to the bearded warrior-king with the harpoon-hand and the bad attitude. Harpoon-hand Aquaman was the character I handled as an editor when Dan Jurgens and Steve Epting were on the book, so I have a certain fondness for him. So Convergence finds Aquaman at a real turning point, and the fact that he’s trapped in Metropolis isn’t helping. The big question is how does he react, cut off from the ocean all this time? Does he go even darker and angrier? Or does he reconnect with his noble, heroic core nature?

Looking at Convergence as a whole, what’s the appeal of working on these characters from throughout DC’s complex history?

TB: Over the years I’ve heard people argue that our long and convoluted continuity is a barrier for new readers, and while I understand the logic of the argument, I’ve just never agreed. I look at the many versions of a character like Batman and they all seem valid to me. Funny ‘60s Batman, grim ‘80s Batman, father-figure Batman, loner Batman – they all work. An event with all these different versions of our characters, all these different timelines crossing? Yeah, count me in. I think it’s more a celebration of how enduring these characters are and how many generations have embraced them. 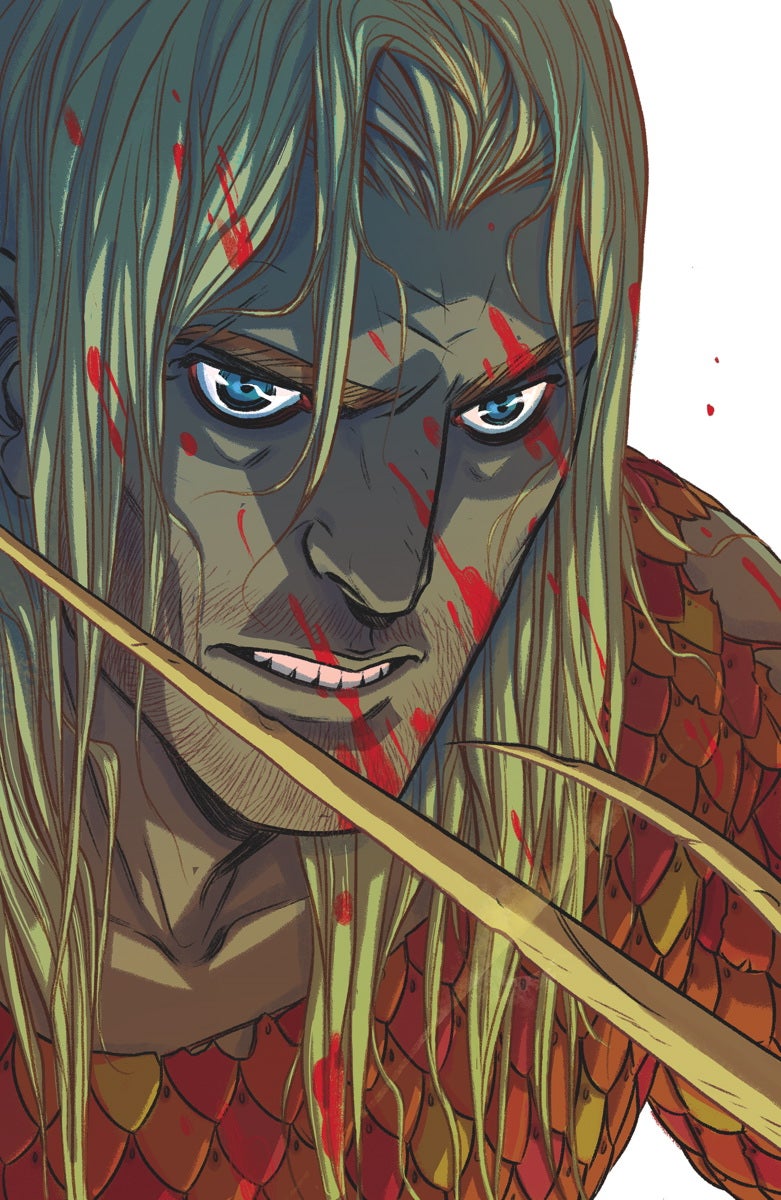 When you’re working with a character out of a specific time period, do you look to the storytelling of that time, or are you applying today’s storytelling techniques to that character? What are the differences between the two time periods that you recognize?

TB: I’m not looking to match early ‘90s storytelling so much as I’m trying to convey who Aquaman was at that time. Also, a year under the dome has had a significant impact. In fact, that’s one of the funnest aspects of this whole event. Not only are you picking up a character from a different point in their life, but the things they’ve seen and done under the dome push them in unpredictable directions. Convergence Aquaman is a character all his own, and capable of things that may shock you.

So we know worlds and universes and timelines are colliding during this event, but even still Deathblow seems like a somewhat out-of-left-field character for Arthur to go up against. What makes him a good foil for Aquaman?

TB: Well, if you’re going to crash continuities together, you may as well go for some unlikely encounters. Deathblow is a pretty dark character – a sort of unlikable Punisher type. And while he’s not superhuman in the same way Aquaman is, he is unkillable. He keeps coming back until he gets the job done. Aquaman quickly finds that it’s hard to win a death-match against someone who can’t die.

What’s one major moment you can tease for this story that you’re excited for fans to see?

TB: Well…there’s a moment early on where Dane Dorrance, leader of the Sea Devils, observes that everyone thinks Batman’s the dark one in the Justice League, but he knows the truth: Aquaman’s the most dangerous Leaguer. By the end of this story, Aquaman just may prove him right.

Are you guys looking forward to Convergence? Let us know in the comments below!

Pokemon and Halloween Collide Thanks to One Mutant Pumpkin