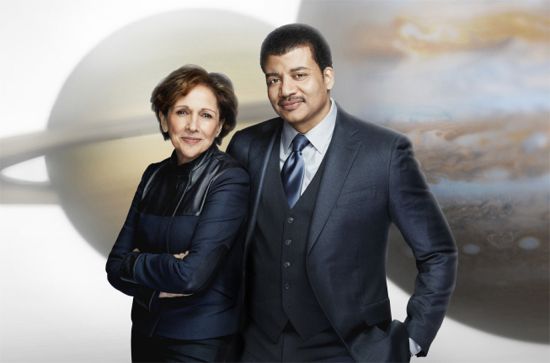 Cosmos: A Spacetime Odyssey will premiere simultaneously on 10 Fox Networks Group Channels tonight. Fox has also announced that President Barack Obama will introduce the premiere episode of the series. In the video message, which leads into the premiere episode, President Obama invites a new generation to embrace the spirit of discovery and inspires viewers to explore new frontiers and imagine limitless possibilities for the future. Cosmos: A Spacetime Odyssey is premiering more than three decades after the debut of Carl Sagan's groundbreaking and iconic series, Cosmos: A Personal Voyage. Host and astrophysicist Neil deGrasse Tyson sets off on the Ship of the Imagination to discover earth's Cosmic Address and its coordinates in space and time. Viewers meet Renaissance Italy's Giordano Bruno, who had a spiritual epiphany about the infinite expanse of the universe. Then, Tyson walks across the Cosmic Calendar, on which all of time has been compressed into a year-at-a-glance calendar, from the Big Bang to the moment humans first make their appearance on the planet. The "Standing Up in the Milky Way" Series Premiere episode of Cosmos: A Spacetime Odyssey will air simultaneously across multiple U.S. Fox networks, including FOX, National Geographic Channel, FX, FXX, FXM, FOX Sports 1, FOX Sports 2, Nat Geo Wild, Nat Geo Mundo and FOX Life on Sunday, March 9, 2014 at 9:00-10:00 PM ET/PT.