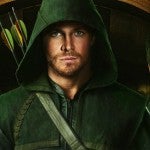 Stephen Amell, who plays Oliver Queen and Green Arrow in the CW Network's upcoming first season of Arrow, says that the differences between his show and Smallville don't stop at the guy under the iconic green hood: the new Ollie lives in a world with no superheroes.

That, then, may be how they're intending to build enthusiasm for the show and remind viewers that they haven't been "betrayed" by the change in tone and direction for the Emerald Archer: just remind them that this isn't just re-casting the part; it's totally re-envisioining the character, and to leave fan-favorite actor Justin Hartley in the part would simply "feel" wrong.

"Nobody in our universe has super powers, so that's a big jumping off point," he's quoted as saying in an article on Zap2It. "I think we find Oliver Queen more injured than we saw him before. Other than in name, there are virtually no similarities between [Hartley's version and the new version]. It's not to say that one's better than the other, it's just that they're so different, it's almost weird to compare them."

Arrow starts in the fall and will air Wednesday nights at 8 p.m.

CW's Arrow: "Nobody In Our Universe Has Super Powers."