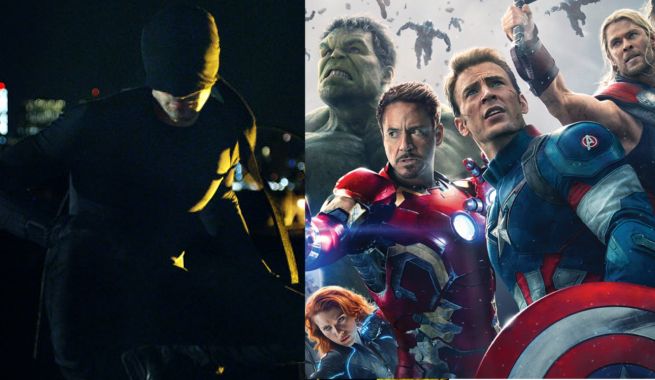 When Daredevil leaps into the Marvel Cinematic Universe with his Netflix original series, expect him to stay in his own little corner of Hell's Kitchen for the first season.

In a recent interview, Daredevil show runner Steven DeKnight confirmed that while Matt Murdock may operate just a few blocks south of Earth's Mightiest Heroes, he will in now way interact with them during season one.

"We all wanted it to exist in the same cinematic universe, but we at no point wanted to lead the audience astray and have Iron Man drop from the sky," DeKnight said. "That's the way we approach this: we're in the same universe, but it's a one in a several hundred million chance that you'd run into one of them."

Furthering the idea that Daredevil will be the Man Without Friends, DeKnight also revealed that none of his fellow street-level heroes—specifically Jessica Jones—will drop by in the first 13 episodes. But according to DeKnight, Jones' absence was simply a matter of timing.

"I would have loved to have Jessica Jones pop up, even for a scene or two, but I was shooting the last two days of the finale when they cast Krysten Ritter as Jessica Jones, so we couldn't do that on our side," he told Wired. "Hopefully down the line, on the other shows, they can take advantage of that a little more."

But fear not. Daredevil will lay a little groundwork for the upcoming Defenders team-up series, which will unite Horn Head with Jessica Jones, Luke Cage, and Iron Fist. According to DeKnight, subtle Easter Eggs were lain across the first season.

"If fans pay close attention, there are little things we drop through the season of Daredevil that might get picked up in Defenders," he further told the magazine. "There are Easter eggs that even I didn't get."

Are you excited or disappointed by Daredevil's season one isolation? Let us know in the comments below.

And in case you missed it, check out ComicBook.com's spoiler-free review of Daredevil's first five episodes. (Hint: It's good)

Daredevil: The Avengers, Jessica Jones Won't Appear In Season One