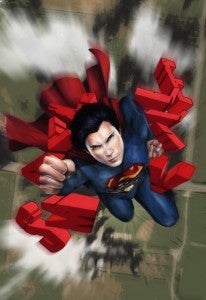 It wasn't one of our ten cancelled shows we'd most like to see come back as a comic book, but the CW's late, lamented Smallville will fly again, according to a rare, late-night entry on DC Comics's blog, The Source. Following on the heels of this week's Justice League Beyond, DC's first digital-first series, Smallville Season 11 will follow suit, launching as a digital weekly series which will be collected monthly into a print anthology which will, according to the blog post, also include an episode guide for the TV series. The first digital chapter will be available on April 13 through the DC app and ComiXology; the first print copies will be available on May 16. No price point has yet been identified for the digital chapters or the print edition, although Justice League Beyond sells chapters for 99 cents each and the print edition for $3.99. Bryan Q. Miller, whose work on the show brought him to DC's attention and whose Batgirl series was one of the most praised before the relaunch and lamented after it, will write the series with interior art by fellow Batgirl alumnus Pere Perez. Covers for the print edition will be provided by frequent Geoff Johns collaborator Gary Frank, while covers for the digital chapters will come from Cat Staggs, whose first-issue cover is shown at right. "Six months after Clark Kent donned the cape and took to the skies to save Earth from Apokolips… enter Season 11!" Miller told The Source.  "New allies abound!  New enemies afoot!  And old friends return where they're least expected!  Pere and colorist Chris Beckett have done a fantastic job of capturing the look of the show and the players, and Gary and Cat are knocking it out of the park on covers. I couldn't be more excited to help give seasoned viewers and new readers an all-access pass to Clark's first year in the cape." Smallville wrapped its tenth and final season last year, going out on a high note as far as both enthusiasm and ratings. The show had popularized Green Arrow with a non-comics audience to such an extent that many fans have identified the New 52 redesign of Oliver Queen as borrowing its look from the show, and the CW recently announced that they were picking up a pilot based on the character. Justin Hartley, who played Green Arrow on Smallville, is not attached; instead the show, titled simply Arrow, will feature The Vampire Diaries's Stephen Amell. Bringing Smallville's popular take on Green Arrow, as well as characters like Chloe Sullivan and even the modified versions of other traditional DC characters who appeared in the show, is an appealing aspect of the relaunch as it allows a version of these characters not recognizable in the current continuity to continue and viewers who miss the show (or who discover it in syndication) will have someplace to go for a comic book analog to what they know.