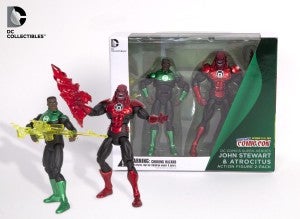 As New York Comic Con draws near, more and more publishers and exhibitors will begin releasing information about the convention-exclusive books, toys and other paraphernalia that can be obtained at the show. In the last twenty-four hours, fans have been treated to a pair of press releases announcing the exclusives that a couple of the biggest names in comics will be bringing with them to the Big Apple. DC Collectibles announced earlier today on their blog that they would have two different convention-exclusive action figures to unveil at the Javits Center in Manhattan next month. The first is actually a two-pack, with Green Lantern John Stewart and Atrocitus, the leader of the Red Lanterns. That's a continuation of the line that they kicked off at San Diego Comic-Con earlier this year, and while they said at the time that they would bring the two-packs to a number of major conventions, it seems likely it'll be a while before they run out of Lanterns to use. 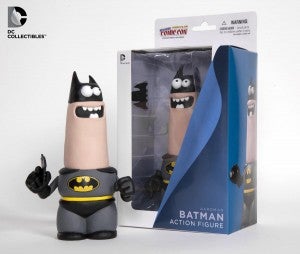 The second figure is a bit more unusual--the Aardman Batman Action Figure at left is designed by Rich Webber and sculpted by Phil Ramirez.  Based on the fan-favorite shorts shown during the DC Nation programming block on Cartoon Network, this unique take on the Caped Crusader was created by the makers of the Wallace & Gromit animated shorts and features. Both of the exclusives are $25 and can be purchased at the Graphitti Designs booth. Image is a bit more comic book-centric, with their announced exclusives so far tying into star creators they'll have doing signing appearances at their booth throughout the weekend at the convention. The first volume of Saga, Brian K. Vaughan and Fiona Staples's smash-hit Image series, will come with a free, signed bookplate for the first 200 fans who buy the volume. That's in addition to convention-exclusive hardcovers for the first volumes of Thief of Thieves and The Manhattan Projects, as well as a red foil hardcover of The Walking Dead Compendium One. Convention-exclusive variant covers will be available for Witchblade #160 and Artifacts #21 (both by Stjepan Sejic), Great Pacific #1 by Joe Harris and Skullkickers #18 by Jim Zubb. Convention-exclusive ashcan editions of Comeback #1 and The Legend of Luther Strode will be available, too.