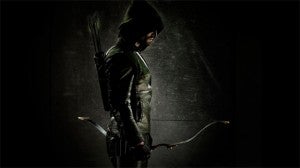 is reporting that Arrow, CW's adaptation of DC Comics' Green Arrow, has been picked up for a full season and will be on the network's fall schedule. Along with Beauty & the Beast, The Carrie Diaries, Cult and First Cut, the show is one of five dramas announced as part of the CW's fall 2012 slate. The Selection, a series with thematic similarities to The Hunger Games, was not picked up. Taking an approach that's been compared to James Bond or Jason Bourne, the new Arrow has cut ties with the character's previous CW interaction in Smallville, where he became a fan-favorite character. Oliver Queen has his own supporting cast and somewhat different backstory in what's a more gritty, urban take on the character. "He doesn't have any superpowers, he's a very grounded character like a Jason Bourne—we use the term 'mambo,'" CW Development Head Thom Sherman told MTV News. "His skill-set is that he's an archer, but he also [has] physical strength and prowess. He's clever and able to devise ways of taking down a bad guy that are unique and fun to watch."

DC Comics Adaptation Arrow Picked Up As a Series