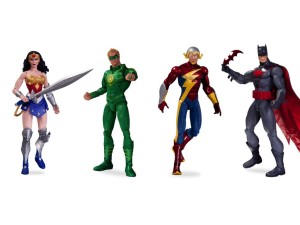 In a new tweet promoting DC's line of Earth 2 action figures, the publisher seems to have spoiled one of the most persistent mysteries of the New 52. The identity of Earth-2's Batman is something that's been a subject of furious speculation and debate ever since the character's first appearance...but no definitive answer had yet been given in the pages of DC Comics. Their official Twitter account, though, seems to be another matter. Spoilers ahead, at least potentially...

While conventional wisdom and most comic book continuities would have thought Thomas Wayne was a poor candidate to succeed his son (it was, after all, his death that helped inspire Bruce to action as Batman), the fact that the costume bears such a similarity to the one Thomas wore in Flashpoint and that he was such a beloved part of that Geoff Johns-written storyline gave some people the idea it was possible. A number of fans have complained below the tweet above that it's a spoiler, with no response yet from DC Comics. We'll update if we see one.