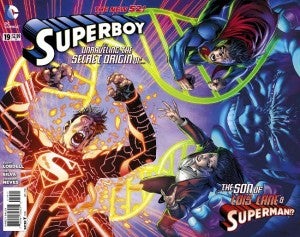 Based on the finally-revealed second half of the Superboy gatefold cover, tracked down earlier today by a user on the CBR forums, it appears that a multiversal implosion that rewrote history and erased their decade-long marriage wasn't enough to keep Superman and Lois Lane from having a kid. In a manner of speaking, anyway--as you can see, the cover for Wednesday's Superboy #19 suggests that the young hero (formerly the child of some hinky genetics that spliced Superman's and Lex Luthor's DNA before the New 52 relaunch) has now been retroactively altered to be the byproduct of Superman and Lois Lane instead. Of course, as with any of these "WTF" covers, many fans are taking a "wait and see" attitude...but so far, the twists seem to be genuine and not just contrived for the sake of the shock covers.

The creation of a Lois-and-Superman baby is an interesting wrinkle in their already awkward and complex relationship in the New 52. Lois, living with another man and unaware of Clark Kent's secret identity, has reverted to being the object of Clark's unrequited affection. While the publisher had hinted at the start of the New 52 that they were interested in exploring the Superman/Lois/Clark love triangle aspect so well known to casual fans, we haven't seen much evidence of that yet--in part because Superman's supporting cast has been largely sidelined by a series of creative changes. When a new writer comes on board, the first priority seems to be to tell a big, widescreen Superman adventure story to reel in the readers on the fence and so far nobody has lasted long enough to get beyond that. It would be particularly surprising to see Superboy's history with Lex Luthor written out of the character's history, given that it was DC's Chief Creative Officer Geoff Johns who not only wrote the idea into being, but championed it years before he was a professional comics writer, as evidenced by the letter (originally printed in Superboy #26 back in the mid-'90s) at left. Notably, this marks the official introduction of Superman's test-tube baby just two months after they killed off Batman's. If something happens to Conner, anybody want to take odds on whether it's Hal Jordan or Barry Allen who finds out they've got a teenager somewhere?

Did Superman and Lois Lane Have a Child Out of Wedlock?