Warning: Spoilers ahead for Justice League #22, in stores this week, and for Man of Steel, still in theaters.

Ever since Man of Steel hit theaters, there's been a vigorous debate online as to whether or not it's ever okay to depict Superman as using deadly force. It's not the first time it's come up, but to many fans it's absolutely key to his character, and while the filmmakers thought it was something he needed to "earn," his aversion to killing seems deeply engrained in what makes Superman...well, Superman. The debate took on a whole new importance this week when he apparently killed Doctor Light while he was under the influence of The Outsider and/or Pandora's Box in Justice League #22. 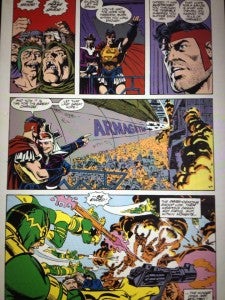 This isn't the first time, though, that his mind has been influenced by a villain--or even the first time that he's been responsible for death under that influence. Back in the early days of the John Byrne era of comics (collected in Superman: The Man of Steel Volume 2), a story took place in which Superman was teleported to Apokolips during the events of the Legends storyline. Hoping to fight Darkseid on his own turf rather than putting humanity as risk, Superman keeps himself hidden until he must fight a group of Darkseid's forces to save the lives of "Hunger Dog" revolutionaries on the planet. During the battle, he is forced to throw himself into the fire pits of Apokolips, unsure he would survive the experience--but he does, only to awaken with substantially diminished powers and no memory as to who he is. When he comes to, he's been found and "saved" by Amazing Grace, who poses as a revolutionary and convinces Superman to aid their cause by leading legions of Hunger Dogs against Darkseid's forces. From the story, by John Byrne, Marv Wolfman and Jerry Ordway: "In the first assault, one thousand Hunger Dogs fall before the forces of Darkseid. But the ten thousand behind them press forward and behind those ten thousand yet another wave stands ready... ...Five thousand more are downed in the first twenty-three minutes. Another ten thousand fall in the second and third assault. Bloodied, weary, hopelessly lacking in weapons, the survivors fight on. This is a war the Hunger Dogs cannot hope to win." These words are, as you might expect, overlaid on top of images of Superman--dressed in New Gods-style armor and calling himself "Savior"--clubbing Darkseid's Parademons during the battles. It would stand to reason that he's doing so with deadly force, since that's the nature of the battle, but it's not made explicit. While that isn't, though, there is something that's made explicit shortly after that: Superman and Amazing Grace declare victory over Darkseid's forces and gather their surviving troops in a city block or so to celebrate--at which time Darkseid arrives and he and the Parademons reveal that "Savior" has been working as a double agent all along. They take the opportunity to eradicate all of the remaining rebels. So--with roughly the same level of influence over his own actions that he was able to exercise in this week's Justice League, Superman contributed directly to the deaths of many thousands of sentient beings, and possibly--probably--committed a few hands-on murders as well. It's notable, perhaps, that this story also predates Byrne's controversial story arc in which Superman killed Zod and the other Phantom Zone criminals with Kryptonite--but as far as we or others we've asked can remember, there was no particular outcry over Superman engaging in acts of war on Apokolips. Why is that? Is it that the beings he killed or assisted in killing were alien beings and the killings were done in the context of battle? That didn't stop fans from being mightily upset when he snapped Zod's neck in Man of Steel. Is it that he was acting under the influence of a powerful villain and not killing anyone of his own free will? Well, that hasn't calmed some readers' nerves about Justice League #22 and the death of Doctor Light. It may be that this story was written pre-Kingdom Come. It seems to me that the emphasis that Mark Waid placed on Superman's unwillingness not only to kill but to allow others to kill (and the fact that the story was so wildly popular and critically well-received) has changed the conversation around Superman's moral code, throwing it into a place that's somewhat more absolute than it had been during the post-Crisis on Infinite Earths years up to that point. Maybe we'll get to ask Ordway at the Post-Crisis Superman panel at Comic-Con next week...