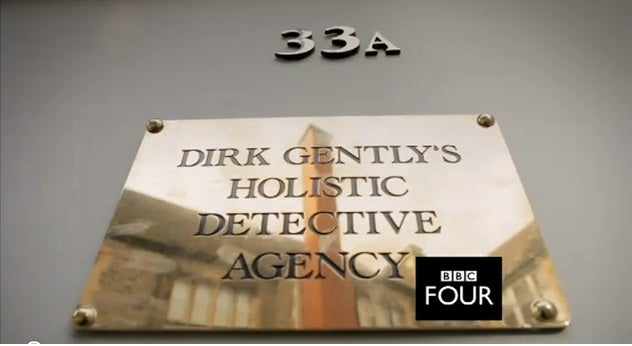 IDW Entertainment and Ideate Media announced today they have optioned the worldwide rights to Douglas Adams' Dirk Gently's Holistic Detective Agency novels. IDWE and Ideate have formed a partnership to co-fund development and co-produce with the intent of securing a direct-to-series commitment.

After creating The Hitchhikers' Guide to the Galaxy, Douglas Adams went on to write a series of best-selling novels about Dirk Gently, a detective with a belief in the fundamental interconnectedness of all things, a unique relationship with the laws of probability and physics, and a love of cats and pizza. The character appeared on a 1992 episode of The South Bank Show and had his own series on BBC Four that ran for four episodes between 2010 and 2012 and starred Stephen Mangan.

IDW will also publish comic books based on the character beginning in Spring 2015, although whether they will be adaptations of the existing novels (as DC did with the Hitchhiker's Guide to the Galaxy series years ago) or original stories isn't immediately clear.

The official pitch: Dirk Gently is a charismatic, mysterious, troubled, brilliant, figure – cursed with a relentless intellect, psychic powers he doesn't fully understand or want, a gift for self-mythologizing, and a supernatural ability to detect disturbances in the fabric of reality, Dirk has found a strange calling as a private detective for impossible crimes.

"Alongside the obvious yada yada I'm a lifelong fan, Long Dark Teatime Of The Soul (the second Dirk Gently novel) is one of the best books ever," said Landis. "Douglas Adams is a visionary who forever changed the way science fiction is written and talked about and even thought about and even the way real actual science is thought about and without whom our culture would be noticeably different for the worse, I'd also just like to say holy crap, it's Dirk Gently. This is any writer's ultimate project, and in the current TV space, it fits ridiculously well. Imagine a playground where you could come with any mystery, no matter how improbable, convoluted, or totally insane and then, simply by finding the right connections, you could tie it all down to one man, one private eye. If you're familiar with the property, you know: there's no freaking rules. Ancient gods? Sure. Larceny and petty crimes? Of course. Extra-dimensional aliens? I mean, probably; as long as you can make it funny, Dirk's on the case. This is a dream project of mine, no joke, and I absolutely positively couldn't be happier."

Ted Adams and David Ozer from IDW Entertainment, Arvind Ethan David and Zainir Aminullah of Ideate, and David Alpert and Rick Jacobs from Circle of Confusion (The Walking Dead) will serve as executive producers.

"Max is one of Hollywood's most brilliant writers and represents the ideal voice in bringing Dirk Gently to television", said David Ozer, President of IDW Entertainment.

Arvind Ethan David, Head of Production and Development at Ideate Media, was a friend and protégé of Douglas Adams and brokered the deal with the estate. He commented: "As a student at Oxford, I directed and co-wrote a theatre adaptation of Dirk Gently. To my amazement, Douglas himself came to see the show - and he liked it and helped launch my career. Almost 20 years later, to return to Dirk, and to add the mad genius of Max Landis to the mad genius of Douglas Adams, is a dream come true and proof of what Douglas, (and Dirk), would describe as 'the fundamental interconnectedness of all things.'"

"Douglas Adams himself always maintained that his Dirk Gently novels had much greater dramatic potential than his better known Hitchhiker's Guide to the Galaxy series. I think he is about to be proven right -- yet again", said Ed Victor, Douglas Adams' long time agent and friend.