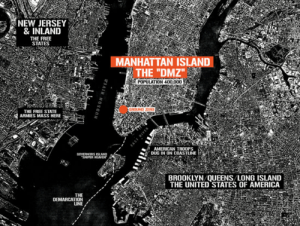 With Star Wars, The Massive and Ultimate X-Men on his plate right now, it's hard to imagine Brian Wood having a lot of time to give DC Comics these days--but it wasn't long ago that he'd been working exclusively or primarily with the publisher for quite a while, and during a period like that, any writer is going to compile a number of unproduced works.

The difference is, Wood has kept everything and a number of his unpublished pitches are now a post on his Tumblr. There's surely more, but here's what he has to say about the ones he calls "near misses":

I’m doing some housecleaning this morning, organizing my Dropbox and work folders and finding a bunch of stuff that never made it into production from my time at DC, although a few made it really close.  Seeing them all together, there’s more than I thought.

1. Rima The Jungle Girl - I was asked by Azzarello to write a miniseries for his First Wave thing, and I wrote the outline and met with the editor and got that approved and all seemed cool, but the green light to start scripting never came, and to this day I have no idea why.  I like the story, and since I wasn’t paid anything by DC for the outline the story’s mine, so maybe I’ll find a use for it.

2. (The Original) Anthem - I’ve since reused the title, but I had an OGN project approved at Vertigo with Jame McKelvie on art that, and I can’t even explain why, just dropped off the edge of the world.  This was late 2009, and I suspect it was the changing of regime at DC that was to blame.  This wasn’t the most traditionally commercial project, and I think in the aftermath it was quietly disposed of.  Following that, I reconfigured this concept in at least a half dozen different ways, trying to make it palatable to DC, with no luck at all.

3. The Re-Imagined Wildstorm Universe - talked a bit about that here.  I had a year of stories mapped out for Wildcats, The Authority, and a new title that I’m not sure we ever decided on a name, but it was a sort of Stormwatch meets Global Frequency thing, using a wide cast of characters, including the DV8 kids.

4. Superman Beyond - I did a few rounds of pitches but this one I pulled the plug on, and the process was starting to remind me too much of Supergirl.

5. Supergirl - whatever you’ve heard about this online is probably true.  Maybe I’ll put the finished scripts online when I’m on my deathbed.

6. Green Arrow - this was only a pitch, originally written for the digital office, for a digital-first series.  Last I heard Jim Lee liked it and tucked it away for possible future use in the DCU.  This was late 2010.

7. Starve - my foodie comic, fully developed as a Vertigo monthly and ready to go at a moment’s notice, only to be scooped by that Anthony Bourdain graphic novel.  Lesson learned: don’t wait too long to pitch.

8. Gotham: Neighborhood Rebellion aka Catwoman Year 100 - When Bob Schreck was at DC, he asked me to pitch a few things, and I did, and none of them got past the first draft pitch stage.  This was one of them, a far flung future crime story featuring a young girl named Nomi Blume (I’ve since used that name in Ultimate X-Men for the Mach Two character… cuz nothing goes to waste).  The other pitches I can’t locate.

9 QC (short for Quattrocento) - a Vertigo miniseries about inventors and secret societies and musical prodigies in 15th century Italy, with the same darker tone that Northlanders has.  This is still in my “active” file, and I hope to get it out there someday.

He followed it up with a blog post in which he revealed a pitch for a DMZ television series, written at DC's request, which he says followed up a request from the publisher earlier to write a movie pitch based on the same property. He linked the full PDF of the pitch, which you can download here if you're interested.

The Catwoman Year 100 is an interesting one; there was a best-selling Batman Year 100 by Paul Pope in 2006, and despite rumors it never got a sequel and neither did any other DC character get a similar treatment. It's interesting to note that apparently the publisher was taking pitches for such projects, even if none ever came to fruition.

Also interesting: Green Arrow as a digital-only series. Where have we heard that before?